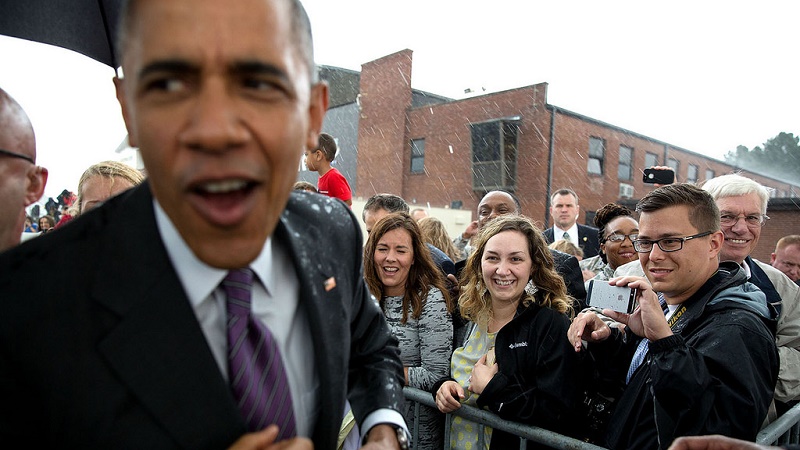 He’s pushed through a clean power plan and secured a UN climate deal that the US can sign up to.

You could forgive Barack Obama for treating 2016 as a victory lap. But the presidential activist has other ideas.

In his final state of the union, aside from the usual sceptic-baiting, he trailed a moratorium for new coal mines on federal land.

POTUS is coming round to the idea climate change should be tackled at its (fossil fuel) source, as well as the tailpipe emissions.

Following China’s three-year freeze on new mines, it is a baby step towards the global ban called for by Kiribati president Anote Tong last year.

Will other leaders follow suit? We’re looking at you, Australia.

It’s another signal for investors to get out of US coal while they can. Arch Coal was the latest company to file for bankruptcy this week.

Clean energy investments, on the other hand, hit new highs in 2015.

As Ed King reported from the City of London, climate-friendly finance is going mainstream.

“Green is a buzzword but it is set to become everyday business” – Spencer Lake, HSBC global head of capital financing

Shippers and airlines might have thought they’d got away with it, when the Paris climate deal neglected to mention them. Why invest in cleaner tech when nobody’s watching?

In its post-Paris report, it called for a carbon levy on bunker fuels, which could raise funds for climate-friendly development.

Taiwan is tipped to elect Ing-wen Tsai president on Saturday, in a swing to the China-sceptic Democratic Progressive Party.

That could spell the end for the island’s nuclear fleet, beset with protests since Fukushima.

Tsai is keen on renewables – the Taiwan Strait has big offshore wind potential – but can she attract the investment needed to meet Taiwan’s climate goals?

Greenpeace says Jennifer Morgan and Bunny McDiarmid will replace Kumi Naidoo as joint heads of the organisation. Veteran climate activist Morgan – a US national – joins from the World Resources Institute, where she was global head of climate.

“Greenpeace is much closer to my roots, and has this incredible advantage in its independence: the policy of refusing government or corporate donations means there’s no need pull punches for fear of offending anyone,” she said.

McDiarmid takes the role after a stint as executive director of Greenpeace New Zealand.

“This arrangement is an evolutionary reflection of Greenpeace International’s entire approach: it’s all about sharing – globally – the power, the responsibility, and the challenge to rise, to become the best we all can be in a time of environmental threat and existential opportunity,” she said.

Coming up in January

He thinks climate change is “alarmist nonsense”. She says it’s “the biggest threat the world has ever known”.

Climate Home would like to be a fly on the wall in their dining room.