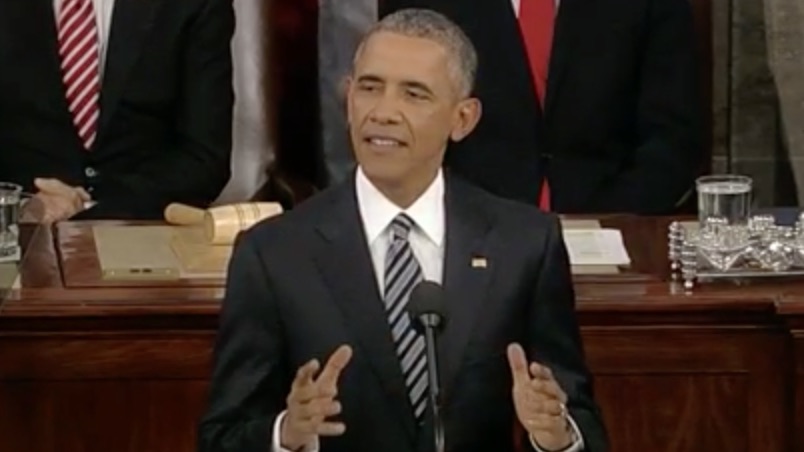 US president Barack Obama used his final State of the Union speech to mock climate sceptics as “pretty lonely” and make the case for higher taxes on dirty forms of energy.

But in a speech noted for attempts to bridge huge differences between Democrats and Republicans, he lashed out at individuals and groups still attacking climate science.

“Look, if anybody still wants to dispute the science around climate change, have at it,” he said.

“You’ll be pretty lonely, because you’ll be debating our military, most of America’s business leaders, the majority of the American people, almost the entire scientific community, and 200 nations around the world who agree it’s a problem and intend to solve it.”

After the disappointment of the 2009 Copenhagen climate summit and failed efforts to develop carbon pricing in his first term, Obama has emerged as something of a green champion to many since winning the 2012 vote.

Canning the Keystone XL pipeline, launching a clean power plan to cap coal plant emissions and signing a historic US-China pact mean he will be remembered as a leader who took the issue seriously.

Most – if not all – of the Republican candidates running to win nomination to run for the presidency have voiced doubts over climate change, notably the favourite: Donald Trump.

But arguing the right-wing Tea Party supported reforms that would give householders “freedom” to produce and store their own energy, Obama suggested the economic case for green energy was now clear.

“Even if the planet wasn’t at stake; even if 2014 wasn’t the warmest year on record — until 2015 turned out even hotter — why would we want to pass up the chance for American businesses to produce and sell the energy of the future?”

“Seven years ago, we made the single biggest investment in clean energy in our history. Here are the results. In fields from Iowa to Texas, wind power is now cheaper than dirtier, conventional power.

“On rooftops from Arizona to New York, solar is saving Americans tens of millions of dollars a year on their energy bills, and employs more Americans than coal — in jobs that pay better than average.”

With under a year left in office, Obama raised the option of imposing greater costs on dirty energy, arguing the country needed to “accelerate” away from fossil fuels.

Previous efforts to develop a US carbon trading scheme have foundered, but North American carbon markets are now growing fast at state level according to recent data.

“That’s why I’m going to push to change the way we manage our oil and coal resources, so that they better reflect the costs they impose on taxpayers and our planet,” he said.

“That way, we put money back into those communities and put tens of thousands of Americans to work building a 21st century transportation system.”

He added: “The jobs we’ll create, the money we’ll save, and the planet we’ll preserve — that’s the kind of future our kids and grandkids deserve.”

Read more on: US | Barack Obama US