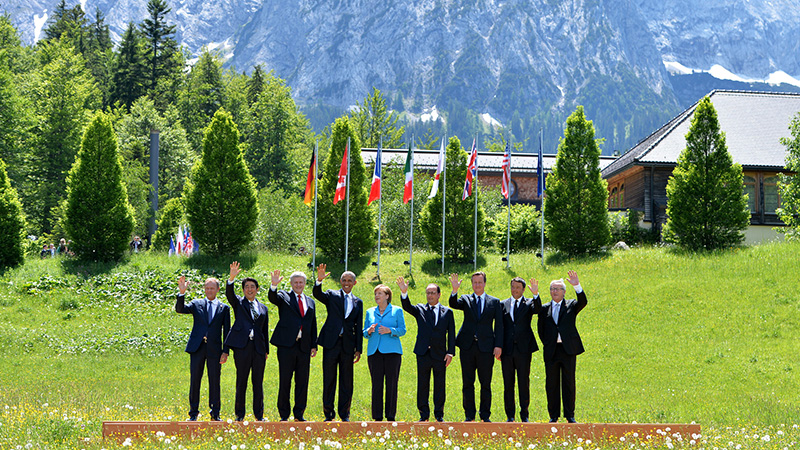 G7 leaders in the Bavarian alps, June 2015. The bloc is made up of Canada, France, Germany, Italy, Japan, the United Kingdom, the United States, and the EU (Flickr: Crown copyright/ Arron Hoare)

“Today, we celebrate. Tomorrow, we have to act. This is what the world expects of us.”

So Miguel Arias Canete, the EU climate chief, cautioned amid euphoric scenes in Paris last month as countries pulled off a global warming accord. The 195 nations agreed to hold warming to ‘well below 2C’ and aim for 1.5C.

But to achieve that, the world must rapidly scale down its fossil fuel burning, scientists say. Measures to deepen carbon cuts and deploy clean energy are crucial.

So one month on, what’s new? We assessed the Group of Seven, with 10% of the world population, a third of its economic output (adjusted for purchasing power) and 22% of its emissions.

PM Justin Trudeau promised to meet with the country’s provinces to harmonise carbon pricing policies within 90 days of the UN summit. Don’t expect a lot before that, says Dale Marshall at Environmental Defence in Ottawa. The incoming government has backed green infrastructure and more rigorous environmental assessments of energy projects like pipelines. A review of the Harper government’s climate pledge is due (the 30% cut on 2005 levels by 2030 will be a “floor”, say ministers) but it might take months. Bigger announcements should drop from September and the national budget in early 2017. The polluting tar sands sector is reeling from tumbling global oil prices, putting pressure on government to offer relief.

The host of December’s landmark UN summit must be an “example” as countries carry out carbon-cutting promises, President Francois Hollande said in his New Year address. Green growth will be one plank to reverse a slumped economy and record unemployment with elections from April 2017. Hollande announced large-scale projects to renovate existing buildings and develop renewable energy. France is unlikely to up its 32% renewable goal for 2030 or its fossil fuel consumption target of a 30% cut by the same year on 2012 levels. The government hasn’t made clear how it will carry out the plans, but will put forward concrete measures later this year, says Carole Mathieu, a researcher at Paris think tank IFRI.

How to nix Germany’s persistent coal usage, filling the gap left by a nuclear phase-out, is the government’s top climate concern. Renewables generated a record 32% of electricity last year, but emissions aren’t budging as dirty lignite and hard coal is burned in big quantities. Environment minister Barbara Hendricks has called for an end to coal burning within 25 years to meet the 2050 target to cut emissions 85-90%. A draft plan is due out in summer, but the industry is fiercely defending its patch. A think tank close to government has outlined a roadmap to that goal, says Bernard Poetter, journalist at Berlin daily Die Tageszeitung. It must shut down around 3-4 coal plants a year (3GW of maximum annual capacity), from 2018-2040 for a smooth transition.

Requests for comment from the country’s sustainable development ministry and domestic experts weren’t returned in one of the G7’s lesser influential members. Dependent on imports for 84% of its fossil fuel usage, renewables’ share of the energy mix has tripled since 2005 to just below its EU 2020 target of 17%.

Japan remains conflicted about nuclear power’s place in its energy mix, after the Fukushima disaster closed down its reactors and coal and natural gas surged to plug the gap. The Asian country pledged to cut emissions 26% from 2013 levels by 2030 to a Paris deal. Nuclear will recover to produce 20-22% of electricity under plans, despite public opposition. That’s crowding out the renewables industry, says ex-UN negotiator Mutsuyoshi Nishimura. The environment ministry and economy, trade and industry ministry have agreed to a round of panel meetings drawing on outside experts to gain consensus on the climate plan.

Britain’s climate secretary Amber Rudd is promising to produce a new climate strategy at the end of 2016. Cutting emissions from transport, the number two source, and insulating buildings to save on heating, are priorities. The country is aiming for a coal power phase-out by 2025, shifting more to gas-fired generators. It has faced fierce criticism for slashing subsidies for wind and solar and cancelling a £1 billion (US$1.4bn) carbon capture fund.

After the sweeping Clean Power Plan landed last year, targeting power sector emissions, 2016 will focus on fossil fuel supply. Barack Obama in his last State of the Union address as president this week said he would “push to change the way we manage our oil and coal resources”. That was interpreted as describing a rule on leasing those fuels on federal land. Rules on methane flaring from the shale industry are expected too. The administration is considering drilling off the Atlantic coast, setting up a battle with communities. As the presidential race hots up, expect polarised views on climate change to be aired.