Arch Coal, the second largest mining company in the US, filed for bankruptcy on Monday.

It is another blow for the ailing fossil fuel sector, as it struggles to adapt to environmental regulations dampening demand.

US coal production fell to 900 million short tons in 2015, the Energy Information Administration revealed on Friday, a 10% decline on the previous year. 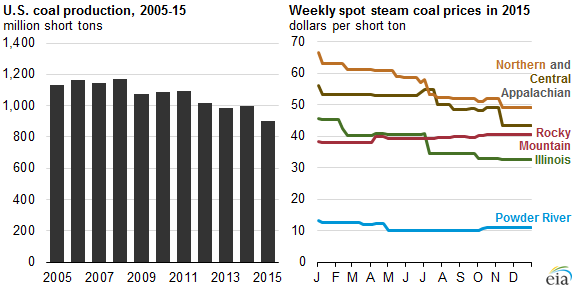 President Barack Obama’s clean power plan is curbing the use of coal for power generation domestically.

The sector is fighting back, with sixth largest miner Murray Energy alone launching a dozen lawsuits. So far, judges have largely upheld the administration’s right to set rules for cleaner air.

Exports were also down, halving from 2014 levels. In China, the largest market, demand has fallen two years in a row. The International Energy Agency is considering the possibility it might have reached peak coal.

Concerned about the climate impacts and air pollution from burning coal, Beijing is banning new mines for three years.

Analysts took the announcement as further evidence the coal industry is in structural decline.

Tom Sanzillo, director of finance at the Institute for Energy Economics and Financial Analysis (IEEFA), said: “Arch’s bankruptcy acknowledges reality. Like most of the coal industry, its outlook continues to be unrealistic. It cannot continue to operate zombie mines and chase the ghosts of past markets.”

James Leaton, head of research at Carbon Tracker, said: “More effort is needed now to ensure the industry is retired and cleaned up in a responsible manner.”