Two weeks of intense negotiations conclude with historic agreement that will see coal, oil and gas use phased out 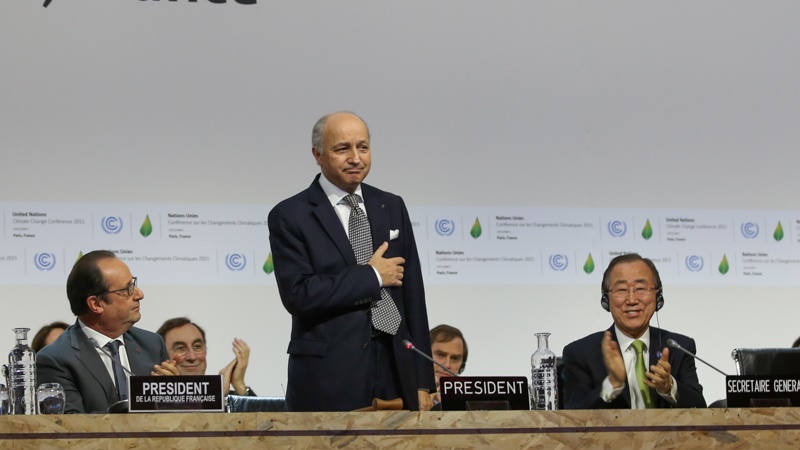 A UN deal to slash greenhouse gas emissions by the end of the century has been agreed by 195 countries after a fortnight of intense talks in Paris.

It is the first time in history rich, poor and emerging economies have made a joint commitment to tackle climate change, aiming to limit warming to “well below 2C”.

All countries are legally obliged to “prepare, communicate and maintain” successive climate plans, though in a sop to the US, the specific targets are not binding.

These will be reviewed on a five-yearly basis, with a first update on national plans expected from governments in 2020 after a 2018 UN emissions stocktake.

A further set of updates on emissions, finance and adaptation will have to be submitted every two years by all nations bar the poorest.

Fossil fuel use in the coming decades could face radical cuts, with countries agreeing to “pursue efforts” to limit temperature rises to what scientists say is a safer 1.5C threshold.

“This would significantly reduce the risks and impacts of climate change,” reads the new agreement.

Envoys applauded and embraced each other as France foreign minister Laurent Fabius, president of the COP21 talks, banged a small wooden hammer on the podium to signal the end of the meeting on Saturday evening.

Earlier in the day he had warned the future of multilateral diplomacy was at stake if a deal was rejected.

“It is my deep conviction that we have come up with an ambitious and balanced agreement,” he said.

Under the deal the US, EU-28 and other wealthy nations are legally obliged to take a lead on emission cuts and provide developing countries with finance to help green their energy systems.

But in a break from previous UN settlements, India, China and other leading polluters have accepted the need to steadily decarbonise economic growth over time.

“This offers a clear signal to developing countries, especially those aiming to decouple growth and fossil fuel use,” said Monica Araya from the Costa Rica think tank Nivela.

Scientists say global carbon emissions will need to peak in the next decade to ensure dangerous levels of warming are not locked into the atmosphere.

The Paris text is not that specific, but aims for peaking “as soon as possible”. After that, countries will aim to “achieve a balance between anthropogenic emissions by sources and removals by sinks of greenhouse gases in the second half of this century”.

Jennifer Morgan, head of climate diplomacy at the World Resources Institute, said that was “transformational”.

“We now have a clear trajectory of the way the world is going,” said Michael Jacobs, an advisor to the New Climate Economy think tank.

From 2020 all governments will be expected to detail how they will reduce their use of coal, gas and oil every five years, building on the 185 climate plans received ahead of the Paris summit.

Under the Paris deal countries rated as developed in 1992 will still have to lead on helping poorer countries achieve their climate goals. They reaffirmed a commitment to mobilise US$100 billion a year from 2020, with that being a “floor” for contributions.

Emerging economies like China, which already offers billions of so-called South-South financing, are “encouraged to provide or continue such support voluntarily”.

The deal stipulates finance for green energy and projects to help communities hit by flooding, droughts and rising sea levels are balanced, a detail hailed by Mohamed Adow from Christian Aid.

And in a summit where the voices of vulnerable nations rose to the fore, the loss and damages incurred by irreversible climate impacts are also addressed in the deal, although no direct compensation will be paid.

Other observers were less impressed. “This does not deliver on adaptation finance,” said Jan Kowalzivg from Oxfam, which wanted to see a clear commitment to $30 billion for adaptation by 2020.

The move was the latest in a series of wise choices by the French, said Nick Mabey from the E3G think tank. “They squeezed every bit of possibility out of this agreement,” he said.

The meeting started with a bang, with world leaders speaking on its opening day. And a decision to choose ministers from countries often accused of stoking trouble at the talks, such as Venezuela and Poland, to chair meetings was labelled a “masterstroke” by a senior UN official.

Marshall Islands foreign minister Tony de Brum also came to the fore, bringing together a “high ambition coalition” of rich and vulnerable countries – albeit while losing an election at home.

The new deal will likely be seen as a triumph for US president Barack Obama, who revitalised his administration’s stance on climate with a flagship Clean Power Plan and 2014 bilateral deal with China.

Republican opponents say they intend to shoot down the agreement down, but Alex Hanafi, legal attorney with the DC-based Environmental Defense Fund, said the fact carbon reduction targets are not in themselves binding would make that job tougher.