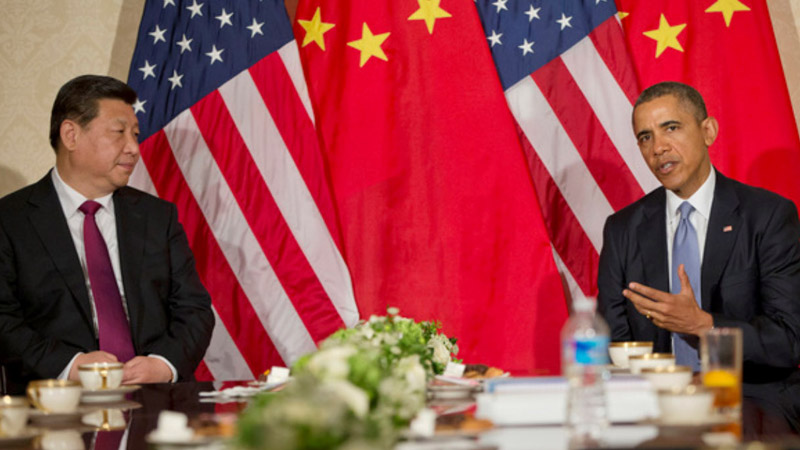 (Pic: US Embassy, the Hague)

China and the United States have struck a climate change deal that will see the US cut greenhouse gases 26-28% on 2005 levels by 2025 and China aim for an emissions peak by 2030.

US president Barack Obama and his counterpart Xi Jinping made the announcement in Beijing’s Great Hall, the result of 12 months of closely guarded negotiations between the world’s largest carbon polluters.

The agreement will provide a critical boost to UN climate negotiations, which resume in Lima at the start of December and aim to reach an international deal in Paris at the end of 2015.

“As the world’s two largest economies, energy consumers and emitters of greenhouse gases, we have a special responsibility to lead the global effort against climate change,” Obama said.

“I commend President Xi, his team and the Chinese government for their making to slow, peak and then reverse China’s carbon emissions.”

The US goal for 2025, a significant increase on its current target of 17% reductions on 2005 levels by 2020 is “ambitious and feasible” said US secretary of state John Kerry, who led talks between the two countries.

Rumours that China could commit to an emissions peak by 2030 had grown steadily throughout the year, but before this agreement there had been no indication Beijing was willing to take radical steps to address its emissions.

Xi Jinping said the announcement had been made in the hope that progress towards a UN climate deal could be accelerated, and said the countries would deepen cooperation across a range of sectors.

“We agreed to make sure international climate change negotiations will reach agreement as scheduled at the Paris conference in 2015 and agreed to deepen practical co-operation on clean energy, environmental protection and other areas.”

“We hope to encourage all major economies to be ambitious – all countries, developing and developed – to work across some of the old divides, so we can conclude a strong global climate agreement next year.”

China has also agreed to boost its share of energy from non-fossil fuel sources to 20% by 2030.

Climate scientists and analysts will pore over the figures in the coming weeks to see if they will place the world on track to avoid 2C of warming, a target agreed by politicians and scientists in 2010.

The UN’s chief climate official Christiana Figueres said she hoped it would spur other leading economies to “bring forward their contributions to the Paris agreement”.

The world’s biggest polluters have agreed to release their projected emission cuts by March 2015. In October the EU pledged a 40% cut on 1990 levels by 2030.

“These two crucial countries have today announced important pathways towards a better and more secure future for human-kind,” Figueres said.

“Allied to the European Union’s recent announcement, this signals in an increasingly positive way a determination towards addressing the climate change challenge from a growing number of key economies”.

Writing in the New York Times, John Kerry said the deal was of “great consequence” and called the news a breakthrough.

“Two countries regarded for 20 years as the leaders of opposing camps in climate negotiations – have come together to find common ground, determined to make lasting progress on an unprecedented global challenge,” he said.

“Let’s ensure that this is the first step toward a world that is more prosperous and more secure.”