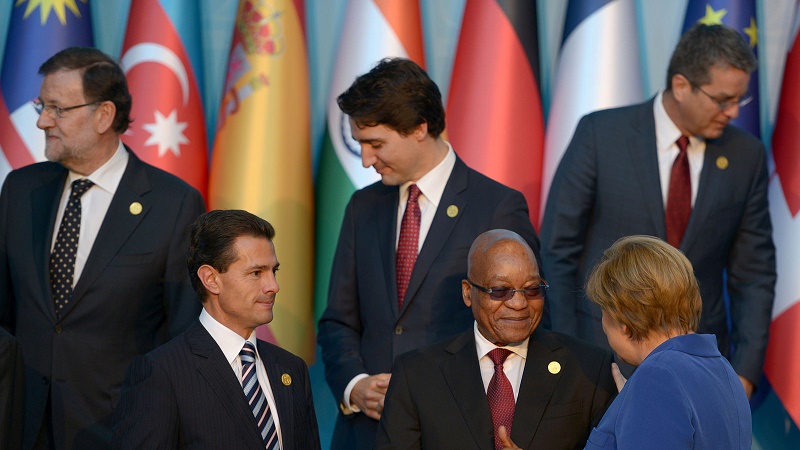 Campaigners looking to this weekend’s G20 leaders meeting in Antalya, Turkey, for progress on the climate agenda have been left disappointed.

In a statement on Monday, the group of major economies reiterated their commitment to a 2C limit on global warming and to phase out “inefficient” fossil fuel subsidies.

There was little sign of convergence on contentious issues ahead of December’s UN climate summit in Paris: how to ramp up ambition, share responsibility between rich and poor, and get finance flowing.

India and Saudi Arabia reportedly objected to a review mechanism that would require countries to regularly update their climate plans. The EU is pushing for five-yearly reviews, a proposal recently endorsed by China.

“The only thing G20 leaders had to say on climate was ‘see you at the climate summit’,” said Oxfam’s Steve Price-Thomas.

“They have two more weeks to demonstrate the leadership needed to secure a successful deal. They must provide more money to help poor countries adapt and commit to revisit and ratchet up their current inadequate national emissions reduction targets.”

Following gun attacks in Paris that killed 129 people on Friday, G20 leaders were more concerned with terrorism than the climate negotiations to be held in the same city.

It was still high on the agenda, with discussions running to 3am on Monday morning. But much of that time was spent debating whether the 2C warming limit – a globally accepted goal – should be included in the statement.

Again, it was India and Saudi Arabia resisting, on the grounds they did not wish to pre-judge Paris. They ultimately backed down.

“A lot of negotiating remains to ensure that we make progress at the Paris climate summit,” said German chancellor Angela Merkel.

On 30 November, heads of more than 120 states are expected to launch climate talks in Paris, amid tightened security. Negotiators then have two weeks to finalise a deal.

The agreement will set a framework for phasing out greenhouse gas emissions and protecting people from the impacts of climate change, based on national contributions.

Analysis: Are major economies putting the squeeze on coal?

Meanwhile, civil society groups had been urging the G20 to deliver on its 2009 promise to phase out fossil fuel subsidies.

G20 members are still channelling US$452 billion a year into coal, oil and gas production, a study by the Overseas Development Institute and Oil Change International showed.

The G20 communique reiterated a commitment to rationalise inefficient subsidies “over the medium term”, not giving the clear timeline campaigners hoped for.

“Heads of state could have provided a clear and powerful signal ahead of the climate summit by putting a date for the end of fossil fuel subsidies, and agreeing to stop funding fossil fuel projects around the world,” Ümit Şahin from İklim için (For The Climate) said.

“Instead they have rehashed worn positions and in doing so risk being on the wrong side of history.”

Also kicked into next year was a proposal by the Financial Stability Board for a climate risk disclosure task force.

This was in response to growing evidence fossil fuel and carbon-intensive companies could lose value as countries curb greenhouse gas emissions.

Shifting finance from dirty to clean sectors will be crucial for countries to deliver on their goals. Yet investors still sink billions into coal, oil and gas assets that cannot be extracted and burned within the 2C limit.

Mark Carney, FSB chair and Bank of England governor, has warned it could destabilise the markets if investors abruptly revalue their stock.

Businesses could be made to reveal their carbon footprints, for example, so investors can judge how exposed they are to greenhouse gas emissions curbs.

The idea was relegated to a footnote in the G20 communique. Under the heading “issues for further action”, it said: “We ask the FSB to continue to engage with public- and private- sector participants on how the financial sector can take account of climate change risks.”