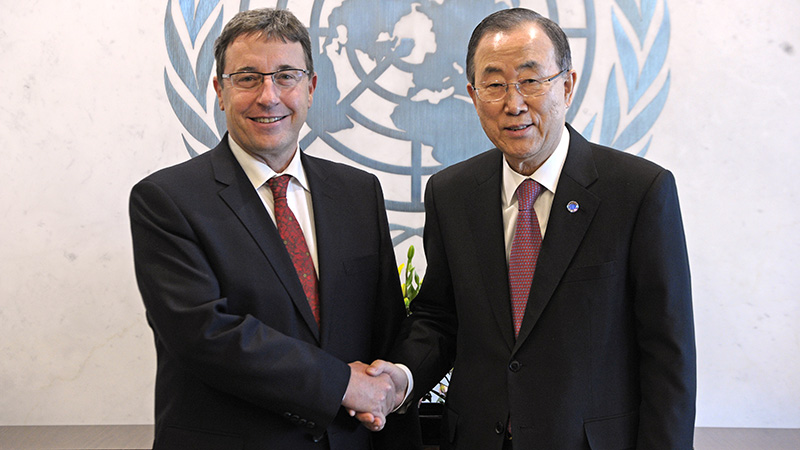 World leaders need to tell their negotiators on a global climate deal to shift positions and compromise ahead of a critical Paris summit in December.

That is the view of Achim Steiner, director of the UN Environment Programme (UNEP), as heads of state meet in New York this week.

He is “perhaps the most important driver right now” of high-level efforts to secure an elusive carbon-cutting pact, Steiner told Climate Home.

“We cannot continue to have bilateral announcements and commitments and yet the instructions to the negotiators remain unchanged.

“The heads of state and governments in the next few weeks have an enormous responsibility. That is why the role of the secretary general is critical.”

Nearly 200 countries are aiming to finalise a framework for slashing greenhouse gas emissions and protecting people from the impacts of climate change in Paris.

Talks have for years been bogged down in political divisions between rich and poor, oil-producing and vulnerable states.

In recent months, ministers have found common ground on some of the contentious topics, in informal settings such as the Major Economies Forum.

Yet participants have warned the technical process is lagging behind, as negotiators grapple with the sheer complexity of drafting a text.

It is “almost inconceivable” that the Paris meeting will not result in a deal, Steiner said. “What will remain challenging is whether that outcome will add up to a sufficiently robust framework for action.”

While his UN colleague Christiana Figueres is heading up the talks themselves, Steiner’s department is busily producing research to inform and boost the process.

There are assessments of the “emissions gap” and “adaptation gap”, which look at the difference between policies and need.

Last time countries tried – unsuccessfully – to strike a deal, 2009 in Copenhagen, they did agree to try and limit global warming to 2C above pre-industrial levels.

So far, more than 60 countries covering two thirds of global emissions have submitted national contributions to that effort.

But analysts say those plans will not deliver the carbon cuts needed to meet the 2C goal.

The level of participation has been “quite remarkable,” Steiner said. “Even though people will rightly note that the gap remains significant, we do have the emergence of a universal, collective approach to dealing with the mitigation challenge.”

It is also important to make adaptation – coping with the impacts of a warming planet – a core part of the deal, he added.

Many developing countries have committed to emissions curbs for the first time – subject to financial and technical support.

In the past year, UNEP has focused on the financial sector and how it can direct funds to low carbon infrastructure and technology.

Steiner said: “Without a quantum leap forward in investment in the transition, countries will not only not be able to implement their mitigation commitments but will actually fail to be able to make climate change part of an economic and development agenda.”

In negotiations, the spotlight has been on a promise by rich countries to mobilise US$100 billion of climate finance a year by 2020.

“The world is struggling right now in constructing this equation of where the finance will come from,” said Steiner.

Many looked to a finance for development summit in Addis Ababa this summer to help unlock those flows.

It wasn’t quite the transformative event some hoped for, but it had a “sufficiently credible outcome,” Steiner said.

“Addis created opportunities to work towards a Paris outcome, but Addis did not provide an answer in itself as to how Paris could mobilise the $100bn and shift to low carbon investment.”

That $100bn is “a critical test” for Paris, but “will one day be seen as a relatively small amount of money”.

The bigger picture is how institutional investors channel cash in the next few decades.

A study released by UNEP this month made the case for pension funds to see sustainable investment as part of their “fiduciary duty”.

“The traditional orthodoxy for pension fund managers was focused purely on a narrow definition of securing the savings of their members,” explained Steiner.

“What we have seen in recent years is a broadening of that responsibility.”

Now, progressive institutions are considering the financial and environmental risks of a high carbon portfolio.

If the world is to avoid 2C warming, scientists calculate roughly two thirds of known fossil fuel reserves need to stay in the ground.

That makes coal, oil and gas exploration – particularly from expensive sources like the Arctic – a gamble. Either the climate will suffer or shareholder returns.

A growing number of universities, faith groups and charitable funds are divesting from fossil fuels in protest at their climate impact.

The biggest signal to date has been from Norway’s US$900 billion sovereign wealth fund, which pulled out of coal holdings.

Steiner spoke at a recent divestment conference organised by activists in Paris, although he stressed UNEP wasn’t advocating such action.

“Divestment is another expression of impatience and frustration with how our economic system is responding to the need to invest in other options,” he said.

“Many have been surprised at the pace and scale at which it has started to impact on the public debate.

“It is a classic case of how citizens can get toward a sense of driving the agenda.”

Steiner is a contender for the top UN job when Ban Ki-moon’s term ends next year.

He declined to comment on a potential bid. “What comes in the future is written in the stars.”