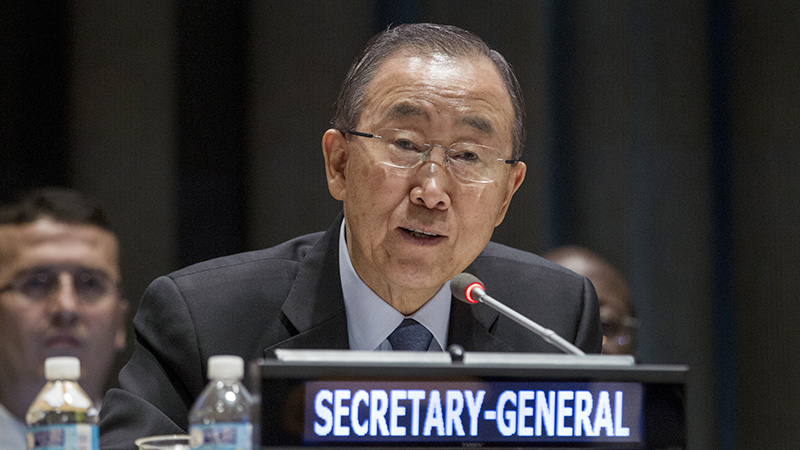 UN chief Ban Ki-moon has invited leaders from 40 countries to a “closed-door” meeting in New York on 27 September to discuss plans for a global climate deal.

According to Bloomberg, UN officials are targeting leaders of the world’s top greenhouse gas polluters, with China, India, US and EU heads of government slated to attend.

“The idea of the heads-of-state working meeting on climate change at the end of September is to give a political push to the negotiations in order to succeed in Paris,” said Alexis Lamek, deputy permanent representative at the French mission to the UN.

“Leaders will exchange ideas on the level of ambition and the means to reach that goal.”

Eight days of negotiations remain before the two-week UN summit in Paris starts at the end of November, where nearly 200 countries will sign off on a deal to limit global warming.

Ban has made his impatience at the slow progress of talks clear throughout 2015. In June, he said they were progressing at a “snail’s pace”.

The latest set of talks started on Monday and are aimed at condensing an 83-page set of proposals into a more manageable document that can form the basis of a deal.

“As if further evidence was needed to illustrate the urgency of the climate crisis, NASA released findings last week that show the world may already be locked into one metre of sea level rise,” he said.

“[This places] many small islands and low-lying coastal states (not to mention major cities such as New York, Shanghai, and Mumbai) at risk for severe flooding, if not total inundation, by the end of the century.”

Still, opening statements from a number of negotiating groups representing the bulk of countries involved in the process have highlighted significant differences remaining.

African states and representatives from small island states expressed disappointment at the lack of funding on offer from richer countries to help them invest in green energy projects.

And a bloc known as the like-minded developing countries rejected moves to ensure the responsibility for making carbon emission cuts is taken by developing as well as developed economies.

“These concepts must be removed from the text,” said the group, which includes India, China, Saudi Arabia and Iran, in a statement released by Malaysia.

Speaking from Bonn, Christian Aid climate advisor Mohamed Adow told RTCC headway had been made in the first two days of talks, with a Marshall Islands proposal for a long term emissions cutting goal and progress reviews every 5 years receiving widespread backing.

“There was broad support for the Marshall Islands proposals yesterday, but across the different discussions you see there are increasing coalitions emerging that favour a lot of good things in the final outcome,” he said.

“These [discussions] are helping to shift and identify the placement of issues and options that will be basis of decision making by ministers.”