Climate negotiators urged to up pace at Bonn session

As politicians converge on substantive issues, interim talks next week must address the legal structure of a global deal 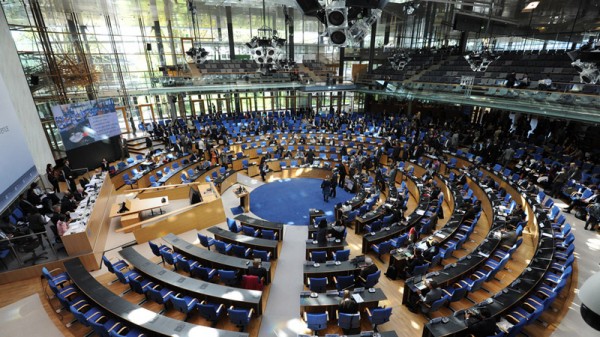 Negotiators on a climate change deal have some catching up to do at interim talks in Bonn next week.

With just 10 negotiating days before they meet to finalise a pact in Paris, they must pare an 83-page text down to size.

Since the last session in June, politicians have found common ground on some of the key issues in other forums: the G7, Major Economies Forum (MEF) and a ministerial summit.

EU climate chief Miguel Arias Canete summarised the situation recently: “The technical talks are seriously lagging behind the political discussion. This must change.”

There is “a bit of a disconnect”, agrees Liz Gallagher, climate diplomacy expert at think tank E3G. “This session will be a bit telling as to how much the ministers are tightening relationships with the negotiators.”

The ultimate goal is a deal this December setting out how countries will cooperate to decarbonise their economies, prepare for the impacts of climate change and support the developing world in both endeavours.

To achieve that, the representatives of 196 countries must not only resolve their conflicting interests but grapple with knotty questions on its legal structure.

Some parts of the deal will be in a legally binding treaty or protocol, to create a long-term framework. Elements that are expected to evolve over time are to go in a separate decision document.

Interview: Paris climate deal ‘not a failure’ if it busts 2C goal

Ahmed Djoghluf and Dan Reifsnyder, co-chairs of the process, last month published a text that starts to organise subjects into those two categories. But a third section – the undecided issues – is the longest.

These include contentious questions on climate finance and differentiation between the responsibilities of rich and poor countries.

“If you don’t have high level political clarity on those key issues, it is very difficult to advance the text itself,” Yvo de Boer, head of the Seoul-based Global Green Growth Institute, tells RTCC.

He cautions against setting too much store in convergence between major powers on the shape of a deal.

“Making progress in the MEF is wonderful, but the MEF is not a representative group,” says de Boer, who led the UN climate body until 2010.

“The things that the process seems to be most stuck on, like finance, are actually the primary concern of countries that are not in the MEF, like the small island states.”

The structure of a deal – what goes where – is not trivial. Development charity Oxfam is calling for a commitment to climate finance – cash to help the world’s poor meet climate goals – in the legal text, for example.

Industrialised countries have pledged to mobilise US$100 billion a year by 2020, but the details are still being thrashed out.

Another important element is a framework to periodically ratchet up the action.

Each country is expected to put forward a national contribution towards global efforts to slash greenhouse gas emissions that drive climate change.

To date, 56 have done so, covering 62% of emissions. More are expected next month, from states including India, Brazil and Indonesia.

“The response so far has underlined the strong will and intent of nations to reach an effective Paris agreement,” said Christiana Figueres, the UN’s top climate official.

The collective targets are not set to be enough to limit warming to 2C, the international goal, she acknowledged.

“But they underline a sharp and positive departure from business as usual and will form the essential foundation to reach that ultimate goal if governments agree to clearly ramp up ambition over time.”

Countdown: 11 events that will shape the 2015 climate deal

Ministers from 46 countries agreed last month that carbon-cutting plans should be reviewed every five years – “a breakthrough,” according to Tubiana.

They stopped short of demanding that governments increase their commitments at each review.

Aside from the specific issues, David Waskow of Washington-based WRI stresses the need to build trust within the talks.

“This is essential so that countries can successfully make final decisions in Paris,” he says.