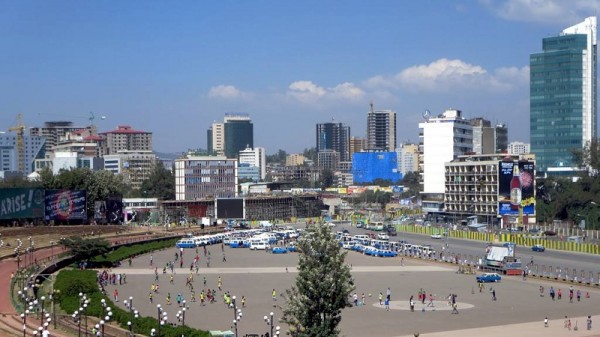 By Leo Barasi in Addis Ababa

The UN meeting in Addis Ababa has reached an agreement on financing global efforts to tackle poverty and hunger. What difference will it make?

Late on Wednesday night, negotiators overcame the long-standing disagreements on international tax reform, with a compromise to upgrade an existing UN tax body.

UN leaders and several negotiators welcomed the deal. UN secretary general Ban Ki-moon labelled it “a critical step forward in building a sustainable future for all” and the EU’s development commissioner called it “an agreement for our world, our dignity, our future”.

But others delegates at the conference had mixed views about the text, with some expressing doubts about whether it represents a significant step forward in tackling global problems.

The text of the Third Financing for Development Conference was agreed after three days of intense negotiations in the Ethiopian capital, involving 95 ministers and vice ministers, which followed several months of preliminary discussions.

The document, known as the Addis Ababa Action Agenda, is similar to the draft text presented at the start of the conference. It added a requirement for the UN secretary general to appoint government-nominated members to the UN tax body.

Its measures include the creation of a new Technology Facilitation Mechanism, designed to improve the UN’s support for transfer of technologies to poorer countries, and a new forum to coordinate infrastructure improvement in developing countries.

It also commits to the introduction of worldwide social safety net systems, which would seek to ensure everyone is guaranteed basic services and protection from hunger and disasters.

To pay for these measures, the agreement emphasises developed countries’ existing commitments such as to foreign aid and climate finance. It aims to draw more private sector funding into supporting development and seeks to improve the ability of poorer countries to raise funding themselves.

The agreement is short on details about the quantity of funds available and when they will be provided, apart from when it refers to existing commitments.

Some observers suggest this lack of detail can be overcome if there are effective measures to review progress on meeting the aspirations made in the text.

“The challenge is the means of implementation: there are some things missing but we have the opportunity to build on them later”, Jean-Paul Adam, finance minister of the Seychelles, told RTCC.

The agreement describes measures for a review process, through an annual forum in the UN’s Economic and Social Council: a detail that had divided negotiators.

“The mechanism does allow follow-up on structural issues and it’s very important that we have annual meetings for continuity”, said Graham Gordon, head of policy at Catholic charity Cafod.

He added, though, that further pressure will be needed to make sure the UN review process is effective: “The key thing is to make sure there is political commitment to follow up and implement the agreement and to carry on talking about the structural issues that haven’t been adequately addressed. It certainly isn’t job done: it’s job started.”

In Adam’s view, the significance of the agreement is that it changes the focus of development finance: “there is a recognition that it can’t be business as usual – that’s reflected very much in the text”, he added.

Representatives of developing and middle-income countries have expressed their disappointment about the lack of a commitment to create a new UN body to review global tax arrangements, with India’s delegate describing it as “a historic missed opportunity”.

Gordon shared this view but added: “It’s only a matter of time before we get a more inclusive process to work out global tax rules”.

The measures on climate change in the Action Agenda are mostly restatements of existing agreements, notably on developed countries’ commitment to provide developing countries with $100 billion a year by 2020 for addressing climate change; the goal to ‘rationalise’ fossil-fuel subsidies; and a passing invitation for governments to explore carbon pricing.

Sources close to the negotiations say oil-producing countries argued against the inclusion of a reference to fossil-fuel subsidies until negotiations finished last night and describe it as significant that the commitment was included in the final draft.

However, concerns about the availability of finance to address climate change have been heard repeatedly in Addis and several observers have expressed frustration that this question has not been addressed adequately.

“There’s been a positive discussion around climate change but we still come down to the issue of how we can fund it,” said Adam.

One of the principal concerns is whether finance for climate change will replace other foreign aid, instead of being additional to it.

“It’s not adequately addressed: no-one’s talking about where these resources are going to come from – if we just use existing ODA [overseas development aid] then definitely it’s not enough”, Adam added.

While funding to achieve the Sustainable Development Goals – due to be agreed in New York in September – is seen as a relatively long-term process, with the Goals having a deadline of 2030, several delegates in Addis pointed to the urgency of funding for climate change.

“Countries in the global south are already rapidly transitioning their economies, and many have renewable targets,” Fatima Denton, director of the African Climate Policy Centre, told RTCC.

She warned that without international support, many countries will not be able to meet the challenges of climate change: “They can’t do it alone – it’s a big test of multilateralism.”

She added that problems caused by climate change “are not created by the south” and that “countries are now facing huge losses on a yearly basis”.

Without action to address these problems, the world will only be paying “lip service” to the Addis conference’s commitment to leaving no country or person behind.

Adam echoed these fears, commenting that funds to address climate change have not been made available quickly enough.

“There’s no sense of acceleration in terms of implementation of the pledges we’ve had in the past,” he said.

He added that small island developing states, like the Seychelles, often cannot access climate finance as they have slightly higher GDP per capita.

“We have to look at needs and work backwards. Addressing climate change allows us to put resources into other aspects of our development to better structure our economy – at the moment we’re putting money into fighting erosion.