Paris climate deal ‘not a failure’ if it busts 2C goal 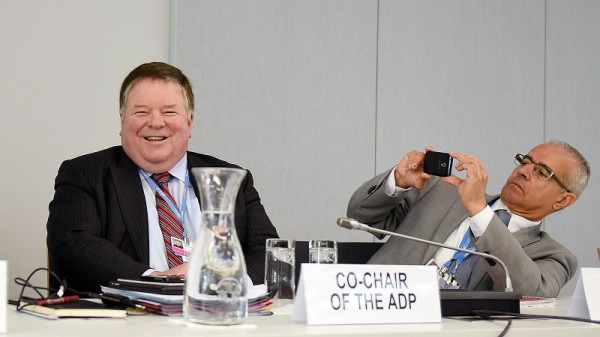 A Paris climate pact will not have failed if it does not deliver greenhouse gas cuts to limit global warming to 2C.

So says Dan Reifsnyder, one of two UN co-chairs coaxing 196 countries towards a carbon-cutting agreement this December.

In an exclusive interview with RTCC, he and colleague Ahmed Djoghlaf stress the significance of getting everyone on board with a deal – even if the combined efforts do not meet an international temperature goal.

“It is not at all a failure if it doesn’t meet the 2C target,” says Reifsnyder. “People seem to think we are all going to get together at a single COP [climate summit] and solve the problem once and for all.

“Climate change is a multi-decade problem; it is going to take the concerted efforts of countries for multiple decades to solve it.”

Djoghlaf agrees: “No-one in his right mind expects to solve climate change on the 11 December 2015.”

Analysis: 9 things we learned at the UN climate talks in Bonn

Instead, the two diplomats hope to put in place a process for cranking up action over time – with the full participation of national governments.

At the last round of interim talks in June, there was little discernible progress towards a deal. The UN climate body’s approach that “nothing is agreed until everything is agreed” can make discussions frustratingly opaque to observers.

Djoghlaf, an Algerian with a background in the UN’s biodiversity and environment programmes, found the climate talks more fraught than he was used to.

“I was quite surprised with the way things happened, especially the lack of trust, the finger-pointing attitude,” he says. “It was a very delicate and sensitive atmosphere.”

Despite that, he adds: “There is unquestionable will to achieve results and some trust has been established between the co-chairs and the parties.”

Then there was the sheer complexity of the issues. They were working with a text Reifsnyder described as “giant and rather unmanageable… essentially a compilation of the views of all the parties”.

Last month, the co-chairs produced a “streamlined” version. At 83 pages, it was not much shorter, but set out the crunch issues in a more structured way.

Importantly, it started to identify which elements would make it into a legally binding deal. Others will be left to a non-binding agreement.

What it didn’t do was find compromise positions – that is for the national negotiators to figure out between them.

And there are still substantial areas of disagreement, from the role of markets to protection of human rights.

Picture: Who’s who in the world of climate diplomacy?

Negotiators are finding some common ground at gatherings like the Major Economies Forum and a ministerial in Paris last month.

What goes on at such meetings is “very important in terms of understanding these positions and building convergence of views,” says Reifsnyder. “But it doesn’t take the place at all of the formal negotiating process.”

Meanwhile, national climate pledges are trickling in, which will form the foundation of a Paris deal.

To date, 53 countries responsible for 60% of global greenhouse gas emissions have submitted their contributions to the UN. These include top emitters China, the US and EU.

Analysts do not expect the combined commitments to deliver enough emissions reductions to stabilise temperature rise at 2C above pre-industrial levels.

As a result, a key focus of negotiations is a framework to monitor progress and periodically ramp up ambition. Also important, particularly to vulnerable countries, is cooperation to adapt to the impacts of unavoidable climate change. And support from rich countries will be critical to unlock action from their poorer neighbours.

“You can’t adopt the kind of legally binding instrument that all the parties are looking for… without identifying the means of implementation,” says Djoghlaf.

Countries have agreed to get US$100 billion a year of climate finance flowing by 2020, but developing countries are wary, demanding a more concrete plan.

Djoghlaf expresses confidence that will materialise. “When a project is well designed, the money will be there,” he says.

Technology transfer and capacity building are also crucial, he added – sharing the tools, skills and institutions for the world’s poor to go green and protect themselves from increasingly extreme weather.

There are 10 negotiating days before the Paris summit to knock into shape an agreement that covers all these bases.

The next session starts in Bonn on 31 August, but for co-chairs the work begins earlier. Some five days beforehand, they will be meeting leaders of negotiating blocs to decide how to structure the discussions.

“We spend a lot of time meeting bilaterally with all the different groups,” says Reifsnyder, “so that when we do begin on the session, we don’t waste a minute on discussing the procedural issues.”