As it happened: 35 cities join Compact of Mayors on climate change

Latest updates from the ICLEI World Congress, with representatives of more than 200 cities worldwide 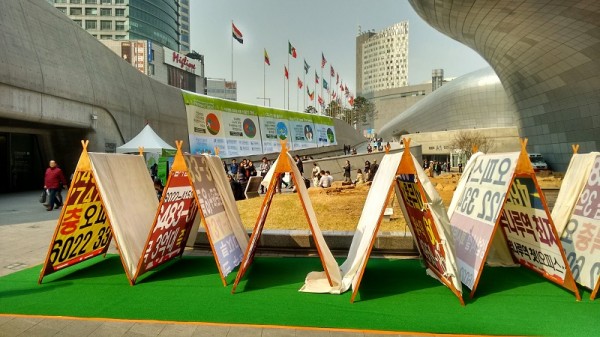 1237 – It’s wrapping up now and I will take my leave. This afternoon there are trips arranged to various green sites in Seoul.

To recap, we have seen 35 cities sign up to the Compact of Mayors, which demands they reveal and report on their climate action plans.

Seoul shared its plans to save or generate cleanly one nuclear power plant’s worth of energy, as a starting point to cut emissions 40% from 2005 levels by 2030.

It is still unclear what role cities can play in the UN climate talks, where typically they are relegated to side events.

1205 – Seoul introduces its climate-friendly plans with a video of a man dressed as a polar bear looking at solar panels, backed by melancholy music.

Hyug-Jae Jang, deputy mayor in charge of climate change, jokes that he is like a polar bear with his white hair.

Now the polar bear is admiring buses, with some jauntier saxophone tunes.

1133 – Things are running late, so they skipped a video earlier on the carbonn Climate Registry, which is the main way mayors are expected to report their progress. This is what they missed:

Some 500 sub-national governments have signed up, making it the largest database of its kind.

It is not perfect. You can rank cities on commitment, performance and action. But each is expressed as a number, with no obvious guide as to what the numbers mean.

For example, Vancouver has the most “actions”, at 116. What are these actions? No idea! Click through to the Vancouver page and it doesn’t tell you.

As with national plans, there is no universal baseline for emissions, which makes it hard to directly compare ambition.

Still, it’s a good idea in theory. Let’s hope they can figure out a way to make it more useful.

1120 – The Seoul Action Plan sets out a bit more detail on what is expected of cities who sign up for the Compact of Mayors, including setting greenhouse gas emission reduction targets with clear timelines.

Meanwhile, ICLEI is launching a Transformative Action Programme (Tap) to help leverage finance and technology transfer for projects that go beyond best practice.

1110 – They are having a family photo of 35 mayors who today signed up to the Compact of Mayors today, promising to create and report on climate action plans. These join 228 cities who got on board at the New York launch last September.

He says: “Cities play a critical role in the fight against climate change, and around the world, mayors are taking measurable action to reduce carbon emissions and address climate risks. The ICLEI World Congress highlights these efforts and encourages cities to take further steps by helping them share smart strategies.

“One of the most effective ways cities are fighting climate change is through the Compact of Mayors, which helps cities to better measure and manage their emissions.  The Compact reflects the commitment that mayors are making to confront climate change and offers proof that international cooperation on climate change can produce big results.

“I congratulate every mayor who made a commitment today.  Thanks to strong support from the City of Seoul, itself a climate leader, ICLEI’s summit is a chance to build even more momentum in advance of the UN conference on climate change at the end of the year.”

1058 – Ahmed Djoghlaf, who will co-chair the Paris talks, is somewhat vague in answer to Rentenaar’s point. He talks about bringing cities “from the side events to the core” but reiterates that national climate plans “will form the backbone of the agreement”.

So far, 33 countries have submitted their national contributions towards the climate deal, covering 29% of global emissions. He praises the European Union, US, Mexico, Switzerland, Gabon for “ambitious” pledges.

Djoghlaf neglects to mention Russia, which surprised observers by submitting its plan on time, but with major caveats.

But Michel Rentenaar, climate envoy for the Netherlands, says the role of cities in UN climate talks has been “too limited”. They hold side events but have not specified what kind of text they want to see in an agreement or what they can deliver.

1035 – Ah, here is a woman: Christiana Figueres, the UN’s climate chief. In a video address, she highlights the evidence 2014 was the first year emissions flatlined while the economy grew. 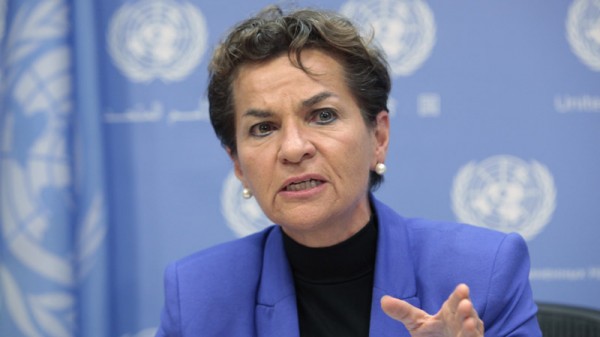 1024 – Paris hosts the critical UN climate talks this December, at which national governments aim to strike a global deal. The deputy mayor was due to appear but dropped out, so we have an unelected official instead.

Before him, we had Ronan Dantec, a councillor from Nantes. He talks about the importance of getting everyone involved: local governments, trade unions, women (“Don’t forget the women!”)…

It seems somebody did forget the women for this panel. Which is a shame, because I found the female mayor of Catbalogan, Stephany Uy-Tan, most engaging when I interviewed her yesterday.

Oh seriously, yet another all-men panel? I know there are too few women mayors but there are some, we need #citysolutions for all

1012 – We hear from three mayors. Mpho Parks Tau is excited about developing bus and cycle lanes in Johannesburg’s commercial district as hosts of an Ecomobility festival in October.

In Montreal, Canada, Denis Coderre is promoting electric cars and reforestation. The province of Quebec gets nearly all its electricity from hydro.

0950 – Mark Watts is here from C40, which represents the big boys – Delhi, Los Angeles, Beijing… Despite the name, it has 75 megacities on board with efforts to tackle climate change.

He plugs the Compact of Mayors, under which cities promise to create action plans within the next three years to cut emissions and improve adaptation to climate change.

They then have to report progress under the CDP cities or carbonn Climate Registry – more on the latter shortly.

He thinks the signs are good for a global climate deal in Paris this December and “we fervently hope it will be a strong deal”. But it is unlikely to put the world on a path to limit warming to 2C, the agreed goal to prevent runaway climate impacts.

Cities can succeed where national governments fail, he says. “We know from the work across all the different city networks that mayors have the power to do that.”

Coming up, city leaders will tell us how they plan to put their climate goals into action and Seoul will show off its own examples. We will hear from Mark Watts, head of the C40 group of major cities, and the UN’s top climate diplomat, Christiana Figueres.