As it happened: City mayors adopt sustainability goals in Seoul

Latest updates from the ICLEI World Congress, with representatives of more than 200 cities worldwide 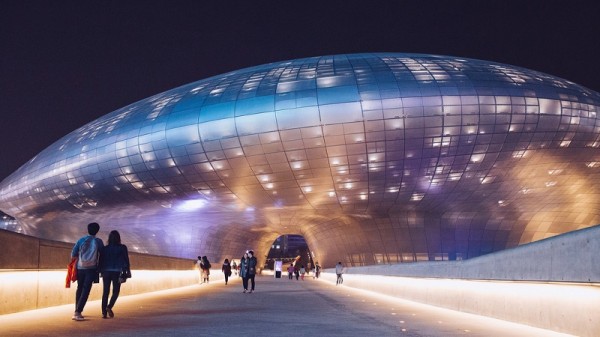 1443 – The conference is breaking up into smaller sessions this afternoon, so I will wrap up for today. Join us again tomorrow for more on how cities can contribute to a Paris climate deal and Seoul’s own sustainability projects. We will hear from UN climate chief Christiana Figueres and Mark Watts of C40, as well as representatives of Johannesburg, Montreal and Paris.

1350 – Won-soon Park, mayor of Seoul and president of ICLEI, hails this as a “very historic day”. He promises to work with C40, a climate collaboration of major cities; United Cities and Local Governments and the UN climate body.

The Seoul Declaration “calls upon all of us to act locally to deal with the issues of climate change,” says James Nxumalo, mayor of Durban.

Gino Van Begin, secretary general of ICLEI, stresses the importance of low carbon infrastructure, with urban populations set to increase by 3.5 billion by 2050.

He says: “If we go on the path of building infrastructure in our cities in the same ways as we have been doing in the last 50 years, we will go under. This planet has not the capacity to bury that.

“We are already today overshooting the natural reproduction that the earth provides us with.” 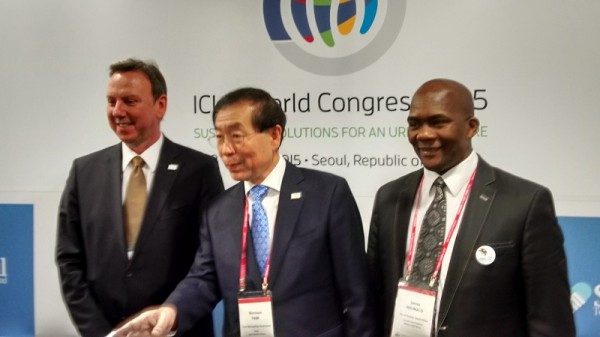 1145 – The Seoul Declaration has been officially adopted, signed by 96 mayors. In the next hour, there will be a press conference with ICLEI executive director Gino Van Begin and the mayors of Seoul and Durban.

@wonsoonpark: After 3 years, cities are no longer the reason but a lifeguard of climate change! #citysolutions pic.twitter.com/oxtFjL2PpJ

1129 – A number of mayors speak in support of the Seoul Declaration. This is the big statement from the conference.

It outlines the importance of cities in addressing “ecological crisis” and nine actions to green urbanisation.

These include backing an “ambitious” global climate deal at this December’s UN talks in Paris, to limit temperature rise to 2C. And they aim to improve biodiversity, resilience and quality of life in cooperation with other cities.

The goals are on the whole aspirational rather than hard targets. The most specific is a UN Environment Programme scheme to cut cities’ consumption of a particular resource (energy, water, food etc) 10% in three years.

But they commit to a “rapid upscaling” of “innovative solutions for urban sustainability”. Workshops over the next few days will get into the details of what that means.

Mayor Kinlay Dorjee from Bhutan explains that Gross National Happiness encompasses the need to look after the environment. #citysolutions

1029 – A word about the sustainability of the event. Delegates are being encouraged to use Seoul’s excellent public transport and re-use water bottles – there are no plastic cups. The organisers promise to offset the event’s emissions by planting trees.

The venue, Zaha Hadid’s futuristic Dongdaemun Design Plaza, has heated toilet seats. I will give a prize to anyone who can make a sustainability case for a warm-bottomed future.

1005 – Randers has time for one question. He talks about the need for collaboration and advocates a carbon tax – not market mechanism – of US$100 a tonne.

0947 – Jorgen Randers, author of Limits to Growth and professor of climate strategy at BI Norwegian Business School, is giving the keynote speech.

He has updated his predictions since writing Limits to Growth and the most likely scenario has some grim implications.

“World populations will grow slower than most people expect, but still fast enough to trigger a climate crisis,” he says.

Carbon dioxide emissions will peak in 2030. We have more than twice as much fossil fuel as we can safely use over the next 40 years. “Any exploration for new gas, new coal, new oil is a total waste of resources,” he says.

There will still be poverty in 2052, says Randers. “This is particularly troubling because a much much better future is possible to achieve if we could just decide to implement it.”

He cites the UNEP Green Economy report, which shows that a cleaner way of living would cost around 2% of GDP. Small changes such as building public transport, small and well-insulated apartments and renewable energy make the difference.

But he warns the market is not delivering the change needed and politically it is hard to achieve. There will be opposition to moving people out of jobs in dirty sectors and moving to more costly forms of energy.

“We need to find intelligent policy which is such that it gives voter advantage in the short term, while at the same time it solves climate change and poverty in the long term.”

0930 – Good morning and welcome to this live blog. Around 2,000 people are here in Seoul to discuss how cities can grow sustainably. Mayors and elected leaders of more than 200 urban areas worldwide will sign the Seoul Declaration today, committing to make their cities efficient, biodiverse and resilient to climate change.

Why cities? Well, more than half the world’s population live in urban areas and that number is growing. Many are increasingly vulnerable to sea level rise, flooding and intense storms that come with climate change. They generate most of the emissions but provide some of the best opportunities for low carbon living.

I’ll be rounding up the best of the speeches and action.