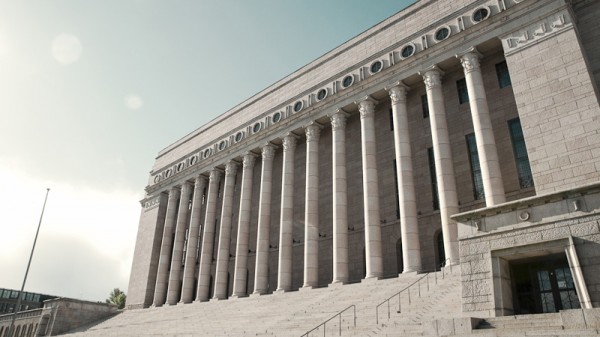 The Finnish Parliament passed the climate law before breaking up for a general election (Pic: Flickr/Antonio Acuna)

Finland has approved a Climate Act setting a target to cut emissions 80% from 1990 levels by 2050, in line with Europe-wide goals.

The Finnish Parliament passed the law 150-33 on Friday afternoon, a week before breaking up for a general election. Only the nationalist True Finns systematically opposed the legislation, which was tabled in June 2014.

It cements Finland’s contribution to the European Union emissions target of an 80-95% reduction by 2050, ahead of key international negotiations in Paris this December.

“The law is a signal that Finland is a pioneer this year as we prepare for the UN’s Paris climate conference,” environment minister Sanni Grahn-Laasonen told Finland’s public broadcaster Yle.

Its Climate Act requires each future government to set out climate policies towards the long-term goal and monitor the results.

Tuula Varis, director general of the Environmental Protection Department, described this as a “breakthrough”.

She told RTCC: “It makes the climate policy planning in the future more systematic and easier to predict the direction we are aiming at.”

Campaigners, who have been calling for a climate law for more than seven years, claimed it as a victory.

“The climate law is a great tool to at least seriously try to avoid the climate catastrophe,” said Leena Kontinen, vice chair of Friends of the Earth Finland, in a statement.

“I hope that other countries also will join us in passing… these strong climate laws that we so desperately need.”

The Greens did not get everything they wanted. After pushback from industry, they settled for an 80% emissions target, the least ambitious end of the EU range.

Finland also stopped short of setting “carbon budgets” for the medium term, as the UK did in its Climate Act.

“Carbon budgets would make it more concrete in a sense and easier to follow whether we were delivering on the promises made.”

“But we think this is the first step and there is room to improve.”

A quarter of Finland’s electricity is sourced from hydropower, with a third from nuclear.