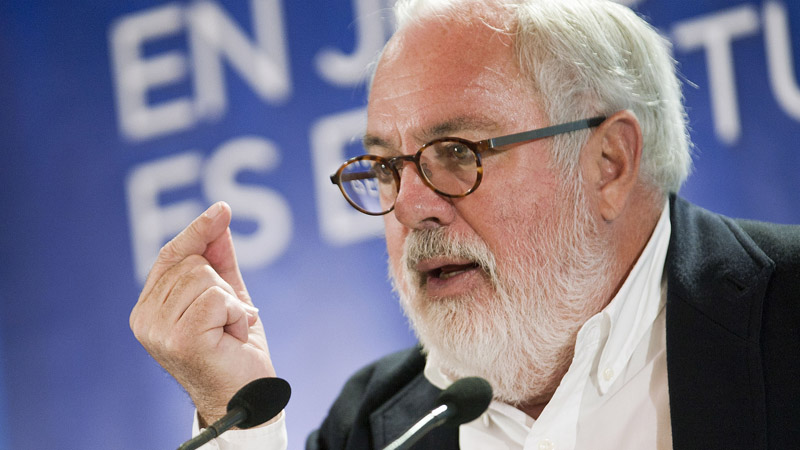 The European Union has become the second party to submit its pledge for a global climate agreement to the UN.

On Friday environment ministers approved the bloc’s intended nationally determined contribution (INDC), which targets greenhouse gas cuts of “at least” 40% on 1990 levels by 2030.

Details of the submission, published on the European Commission website, say it is in line with global emission cuts of 60% on 2010 levels by 2050.

The EC said this was “at the upper end of the IPCC’s [UN climate science panel] range of 40-70% reductions necessary to achieve the below 2C target.”

In a statement European climate commissioner Miguel Arias Canete said the submission was “ambitious and timely”.

“I now call on all our partners, especially major and emerging economies, to come forward in time and at least match our level of ambition,” he said.

UK energy and climate chief Ed Davey said the contribution was a “symbolic moment” on the road to Paris.

This week Canete told RTCC that the pledge to cut emissions by “at least 40%” would not be achieved by changing how the EU accounted for major carbon sinks like forests, which absorb CO2.

An earlier proposal from the Commission indicated it could use offsets to achieve the 40% goal, which met stiff criticism from NGOs and the UK government.

The EU’s submission comes after Switzerland released its commitment to a proposed global climate pact, aiming for 50% carbon cuts on 1990 levels by 2030.

All major economies are expected to deliver their INDCs to the UN by October 1 so it can assess if they will be enough to prevent warming of above 2C, a level deemed dangerous and one governments have agreed to avoid.

Jonathan Grant from accountants PwC said the 40% goal looked “ambitious” given an expected 54% rise in the EU’s economic growth from 2000 to 2030.

“The EU will need to nearly double its current rate of decarbonisation to achieve the 40% reduction target by 2030,” he said.

“By 2022 European countries will need to have the same carbon intensity as France today, which is the lowest of the G20 countries, and then cut this by a quarter by 2030.”

“Their climate package is an ambitious start, but it leaves room to go even further in the months ahead,” she said.

“We expect the EU and other countries to look for ways to strengthen their actions in the lead up to a strong, universal climate agreement in Paris.”

But while the speed of the EU’s announcement was broadly welcomed, some observers expressed disappointment the pledge did not offer more assurances on climate finance to developing countries, or offer support for a climate compensation mechanism.

“How can we adapt to climate change impacts without a commitment on finance? How can African governments scale up their climate action if they don’t know what finance and technology is available to them,” said Azeb Girmai from LDC-Watch in Addis Abba.

Philippine climate campaigner Lidy Nacpil said the EU should have aimed for tougher carbon cuts, accusing Brussels of ignoring “our lives and our rights.”

“The science is very clear that such weak targets, combined with the ongoing use of discredited carbon markets, means we are not on track to tackle the climate crisis, and that the EU is now complicit in committing us to further destruction,” she said.

Analysts at the Carbon Pulse website said European plans to meet its goals through its struggling emissions trading scheme would likely be further undermined after the release of free pollution permits worth “hundreds of millions of euros” to major businesses.