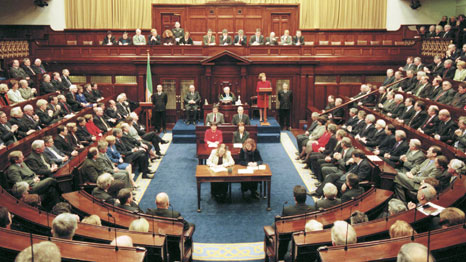 Ireland has published the foundations of its new climate change bill, which outlines the government’s strategy for achieving a low carbon transition by 2050.

The legislation will provide the framework for Ireland to pursue cost-effective solutions to climate change, said environment minister Phil Hogan.

Similar to the UK’s own 2008 Climate Change Act, Ireland’s bill lays out the framework for specific targets to be adopted through five-year National Low Carbon Frameworks – a policy which will be overseen by an independent National Expert Advisory Body on Climate Change.

The bill’s objective is to allow Ireland to “pursue and achieve transition to a low-carbon, climate-resilient and environmentally sustainable economy”.

Hogan said that the bill is “unequivocal” in affirming Ireland’s commitments to its present and future obligations under EU and international law. It specifically instructs the government to pay heed to future targets that are expected to be established by the EU and the UN over the coming years.

He added: “Low-carbon, climate resilience and economic competitiveness are not mutually exclusive objectives – we can be, and we will be, successful in a low-carbon future if we get our policy right.”

Today’s bill is an updated version of previous drafts, which were submitted to the Environment Committee for review.

Politicians involved in this process responded positively to the new amendments, which included strengthening the independent advisory council and reducing the time between the National Low Carbon Frameworks from seven to five years.

“I welcome the publication today of the revised Heads of the Climate Action and Low-Carbon Development Bill 2013 following their approval at Cabinet last week,” said Kevin Humphreys, a Labour politician who provided feedback on the previous draft.

“This is another key step to tackling this global problem, and delivers on an important commitment in the Programme for Government.”

The bill has been criticised by some activists for the lack of specific emissions reductions targets for 2030 and 2050.

Hogan defended the bill at a press briefing this afternoon, saying that the new roadmap would be in line with EU targets, and so there was no need to repeat them within domestic legislation.

“I reject completely any criticism that we failed to meet targets. We have signed up to binding EU targets and we have no need to reiterate them,” he said.

The EU has agreed to reduce emissions between 80 and 95% by 2050, and is widely expected to agree a 40% emissions reduction target by October this year.

But Joe Curtin, a climate and energy policy analyst at the Institute of International and European Affairs, told RTCC that, despite some vague wording within the bill, he was in favour of not having specific targets.

He pointed out that the precise definition of the “low-carbon, climate-resilient and environmentally sustainable economy” described by the bill remains ambiguous.

“The policy environment is too uncertain, especially the European policy, but I would have liked the bill to have had a more strongly formulated vision for 2050,” he said.

“I think targets are a bit of a red herring. It’s more important to have a robust framework to allow policies to be bought forward.”

The bill is expected to become law by the end of the year.