Pope urged to divest from fossil fuels as he visits Philippines 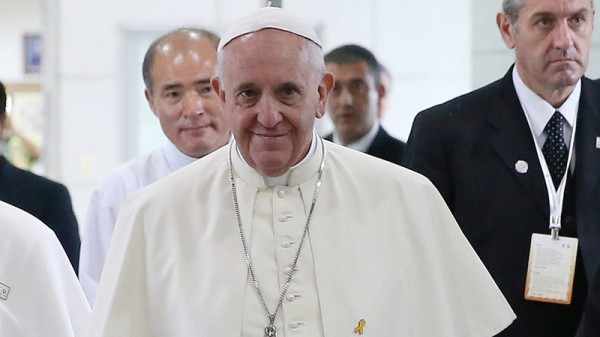 Faith and development groups are calling on Pope Francis to ditch the Vatican’s holdings in fossil fuels ahead of a visit to the Philippines this week.

They are promoting the move as a way for the Pope to act on concerns about climate change and its impact on the world’s poorest.

On Saturday, Pope Francis will take mass in Tacloban, the city devastated by Typhoon Haiyan in 2013, and meet survivors of the storm.

“We need him to stand in defence of humankind and the environment and take the lead in actions that will help prevent further climate catastrophes,” said Lidy Nacpil, 350.org board member and coordinator of Jubilee South – Asia Pacific Movement on Debt and Development.

“One such urgent action is full divestment from the fossil fuel industry. We urge the Vatican and the Roman Catholic Church to lead the way.”

The divestment movement aims to stigmatise companies that profit from selling the fossil fuels responsible for most greenhouse gas emissions.

These emissions cause climate change, which scientists say is raising the frequency and intensity of typhoons.

A number of faith groups, including the World Council of Churches, have committed to phase out investment in fossil fuel companies.

Yeb Saño, a climate change commissioner for the Philippines, urged the Pope to take on “vested interests” preventing action.

The climate crisis reflects “a profound global moral crisis,” said Saño. He has been on hunger strike and a 1,000km march to draw attention to the plight of those hit by climate change.

“We look to Pope Francis to break the political impasse preventing real action on climate change,” he added.

The Pope urged unity at UN climate talks in Lima last month and is preparing a heavily trailed encyclical on “human ecology”.

This is expected to come out in late February or March, months before countries are set to agree a global climate deal in Paris.

There has been widespread speculation the Pope will take on climate change deniers and send a message to political leaders.

People familiar with the matter say it will not rewrite the rulebook, however.

The document, to be written in Latin, aims to encourage Catholics to reflect on their lives and will largely focus on poverty.

John Leydon, a priest from the Missionary Society of St Columban, framed the divestment call as an appeal to relieve human suffering.

He said: “Political and economic decision makers and church leaders hardly appreciate the extent to which the insatiable demands of our global economy are thoroughly tearing apart the web of life, with disastrous consequences for future generations.” 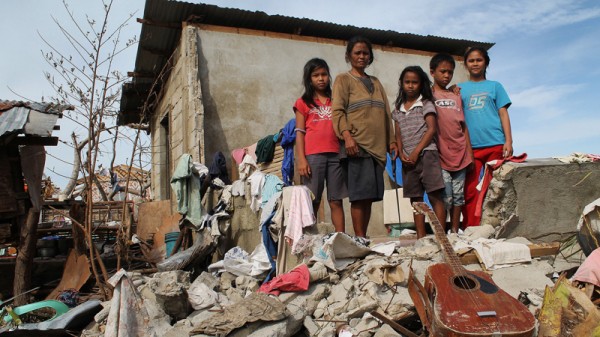 Corazon dela Cruz and her four children in the wreckage of their home destroyed by Typhoon Haiyan
(Pic: Pio Arce/Genesis Photos – World Vision)

On his trip to the Philippines, the Pope’s themes are “mercy and compassion”. He is scheduled to have lunch with victims of Typhoon Haiyan.

More than 6,300 Filipinos died in the tropical storm and many thousands more lost their homes.

Around 80% of the country’s 100 million people are Catholic and the Pope’s visit is expected to cause gridlock in the streets of Manila and Tacloban.

Aude Archambault, CAFOD emergency manager for the Philippines, said: “We pray that the Pope’s visit this weekend will provide a source of comfort to typhoon survivors, while drawing the world’s attention to the impact of disasters on vulnerable communities.”