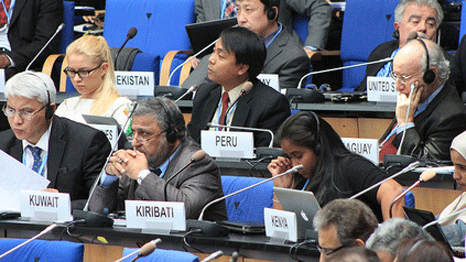 An emotional speech from Filipino envoy Yeb Sano today showed delegates at UN climate talks in Poland just how much is at stake, as they gathered at the summit’s opening ceremony.

Sano wept as he told the room of the devastation that Super Typhoon Haiyan has swept through his country, and announced that he would fast throughout the two-week conference “in solidarity with my countrymen who are now struggling for food back home”.

The Filipino delegate said that he would keep this up until “a meaningful outcome is in sight”. This includes concrete pledges to fill up the coffers of the Green Climate Fund, as well as progress on a loss and damage mechanism, and “real ambition on climate action”.

Sano’s words were echoed throughout the opening ceremony. Meeting today at the National Stadium in Poland for the UN’s annual conference on climate change, representatives from countries involved in the negotiations laid out their priorities for the forthcoming negotiations.

Representatives from each of the negotiating groups clarified the position that they would take within the talks. Loss and damage, where rich countries pay compensation for the irreversible effects of climate change, was a recurring theme, particularly from delegates representing groups of particularly vulnerable states.

Addressing loss and damage, and progressing with a mechanism to make such payments operational, has potential to be one of the “lasting legacies” of the Warsaw conference, said the delegate from Nepal, representing the Least Developed Countries group, who face some of the worst impacts of climate change. He adds that there is still the opportunity to halt global warming at 1.5C, although this opportunity is fading fast.

The Alliance of Small Island States representative also pushed for an ambitious approach to the negotiations.

Ambassador Marlene Moses highlighted that a new agreement in 2015 needed to take into account the “common but differentiated responsibilities” of different countries, but that this approach does not absolve any countries from committing to ambitious action.

Panama, speaking on behalf of the System for Central America Integration group, said that although their region is one of the most vulnerable, they are already using their “scanty resources” to make a difference.

Despite being the second largest oil producer in the world, Saudi is still counted as a developing country by the UN’s climate body. It has a history of trying to block ambitious action on climate change, intervening in discussions taking place last May to say that tough mitigation targets would be “highly political” and leave a “bad taste.

“It’s not surprising that they’re talking about voluntary commitments given that their whole economy is structured around fossil fuels, so they’re unlikely to be champions of ambition,” said Liz Gallagher, senior policy advisor at E3G.

See the full details at our liveblog of the ceremony.