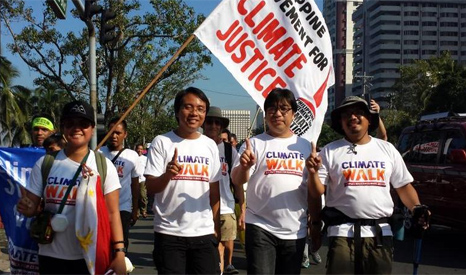 A 1,000 kilometre march to raise awareness about global warming has started in the Philippines, led by the country’s chief climate diplomat Yeb Sano.

Setting off from the capital Manila, campaigners aim to arrive in Tacloban on November 8, exactly a year after super typhoon Yolanda smashed into the small town.

Over 6,000 people died when Yolanda made landfall in 2013, bringing intense wind, rains and causing storm surges and heavy flooding.

Scientists are unsure whether Pacific typhoons will increase in frequency or severity due to climate change, but sea levels are rising faster in the region than the global average.

Sano, who represents the Philippines at UN climate conferences, said the walk was “dedicated to people around the world” at risk from climate impacts.

He said the marchers plan a series of educational programmes in the towns and villages they pass through to help people prepare for future extreme weather events.

“It aims to empower communities and help them become resilient to the impacts of disasters and climate change.”

In an emotional address at the 2013 UN climate conference in Warsaw, he told fellow delegates the world had to act “to stop this madness”.

“We cannot sit and stay helpless staring at this international climate stalemate. It is now time to take action. We need an emergency climate pathway,” he added.

The Philippines “march for climate justice” comes two weeks after an estimated 400,000 took to the streets of Manhattan to demand climate action ahead of a UN summit.

Next year nearly 200 countries are scheduled to agree on a new UN-backed plan to curb greenhouse gas emissions, which hit a new annual high in 2013.

INTERVIEW: Sano sails to the Arctic in “clarion call” for climate