In their own words: indigenous people from Canada, Finland, the US, Guatemala and Peru tell their climate stories 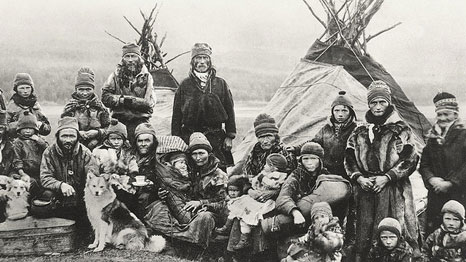 Nordic Sami people in the early 1900s – before they had to worry about climate change (Pic: Christopher Forster/Flickr)

By Sophie Yeo and Gitika Bhardwaj

From Alaska to Peru, indigenous people across the world are already having to face up to the damage that climate change is imposing on their land.

Due to their reliance on the land – culturally, spiritually and physically – indigenous people are one of the most vulnerable to climate risks. But campaigners warn against seeing them as one heterogeneous group.

From region to region, the difficulties and opportunities posed by climate change differ wildly. While in the Arctic circle, communities are worrying over thinning ice, in Peru communities are having to deal with the loss of their rainforests.

This week at RTCC, we’ve been looking at where indigenous people fit in the climate jigsaw, including their role in the UN, adaptation initiatives in Kyrgyzstan and how a Brazilian tribe is using solar powered smartphones to fight illegal logging.

To round up, we’re handing the stage over to indigenous people themselves. Here’s how they are coping with the loss of their “Mother Earth” – and how they’re fighting back.

Climate change is having a dramatic impact for Indigenous peoples in Canada.  Because of the geographic location of many of our communities and our relationship to the land and environment, our reliance on traditional foods and resources, we are the first to experience the impacts of climate change. 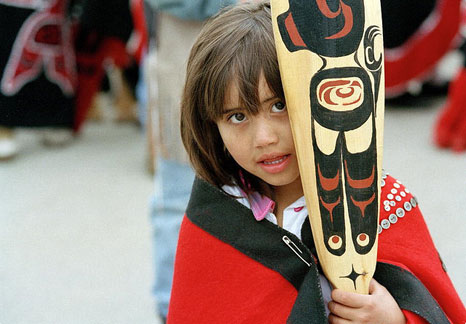 1993: A Heiltsuk girl from the First Nations of Canada holding one of the paddles of the “Glwa”, the Heiltsuk canoe (Pic: UN Photo/John Isaac)

We absolutely must recognize here in Canada as well as in the international community the negative health and lifestyle impacts of climate change and act immediately to ameliorate these impacts in the interests of all peoples and our environment.

The Mi’Kmaq have one of the longest coastlines of any of the Aboriginal Peoples of Canada. Climate change is affecting our in land rivers and lakes with warmer waters and a larger incidence of acid rain, and coal burning pollution killing our fish.

Climate change is affecting our transmission of knowledge or transgenerational teachings with fewer and fewer opportunities to walk the shores, woods, wetlands, caves, mountains where we can see or hear fowl, animal, or fish life, with insects and plant life and thus begin our talks and stories with those around us to pass on our language, knowledge and world view as an eco-centric people.

Climate change is killing our Mother Earth – our continuum will come to an end sooner than foretold.

The nuclear issue – including fracking – is a big thing for us in our community. New York State is trying to develop gas resources – we have a lot of gas resources and people are going at it.

In New Brunswick, there was a demonstration by the Indians where they protested against fracking from an energy company from Texas. Then there was an injunction, people’s heads got busted and they were all put in jail because they were protesting.

Climate change is a really big thing. We always hear how our populations will not sustain, the glaciers are melting and we’re not going to be sustainable anymore.

That’s one of the projects we have had with the Indigenous Women’s Network which is sustainable community gatherings since the 1980’s and what we try to do is bring together people who are working towards sustainable communities – whether its food or energy – so that we can be better stewards of the land and not just become the victims of climate change. 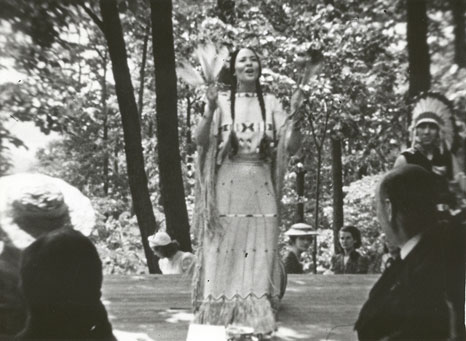 In 1939, Ojibwe, Navajo, Seneca, and Dakota peoples were invited to share indigenous folklore and dance with the King and Queen of England during the hot dog picnic at President Roosevelt’s cottage in New York (Pic: FDR Presidential Library & Museum/Flickr)

Solola has never seen a season as dry as it is experiencing right now. The corn fields are beginning to dry out and the corn is not developing as it would normally. Farmers are beginning to go out in the early morning to water more than usual because it hasn’t rained in weeks.

The community is worried that if the climate continues to change as drastically as it has in the past few years our indigenous communities might experience the biggest change in diet, with less corn being produced. Indigenous people in Guatemala depend heavily on corn for their diets.

Without tortillas indigenous people wouldn’t just lose their food but their identity, their work, their income and their history.

We are reindeer herders and we are seeing the reindeer change their migration patterns … This has changed our livelihoods. We now have rain falling steadily for long periods in the middle of winter.

In the past it would only rain once a winter, if that. This causes ice-snow, which the reindeer can find impossible to break through to reach the plants beneath, and also makes the ice on lakes and the surface of the ground unpredictable.

The government sometimes dispossesses Forest People without any compensation. Commercial deforestation simply cuts the trees down without preparing the Indigenous Peoples. We are forest people; we use the forest for medicine, for hunting and gathering, for fruits.

I really think the fish are moving toward the Yukon (120 miles south). Global warming is here. Scientifically, we can’t solve it, but as human beings, we can slow it down by driving less. [Cars cause] carbon dioxide.

There is bad weather and every year it’s getting worse and worse. Thirty years ago the permafrost was solid underground, so the land was flat. Now there’s dents everywhere. If we don’t identify greed, we will destroy the earth. The greedy take and take. Get greed under control! 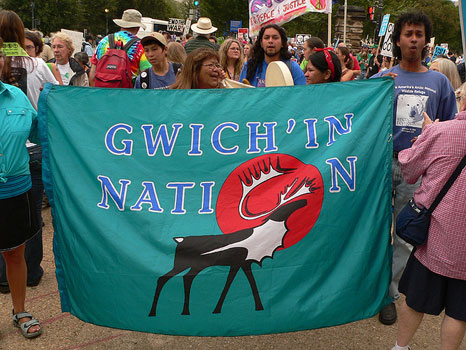 Members of the Gwich’in Nation go on a peace march in 2005 (Pic: yeimaya/Flickr)

More vegetation is growing because of lots of rain. The brush is hard for caribou … Couple of years ago, we saw a polar bear; then another year we had problems with wolves killing our dogs.

Things are changing so much. The river turned red from the red rock. This has never happened before. The basin upriver was shaken by rain, hail, and thunder.

Rich people go anywhere they want and always roll over us Native People with money. A plane from Fairbanks burns 50 gallons an hour, so that’s a 100 gallons roundtrip every day. We [Arctic Village Gwich’in] don’t burn that much. The city is different.

Grandpa and grandma would tell stories how the “world is getting warmer and warmer.” Back then, when it would get into the 20s, that was a heatwave. Ice would be so thick in the (Kotzebue) Sound, it would take a while for it to get out because there was a lot of thick ice out there, but now ice is not as thick as it used to be.

Ugruk [bearded seals] are always looking for good ice to lay on, this is a migration area as they go north to find ice, so if no ice here, then they keep going. So some years we have no ugruk.

When a mining company came to Huancavelica, many people came into the community to profit, and the money changed our lifestyle – we saw things we had not seen before, like prostitution and alcoholism.

These changes weaken our communities to the point where they are disappearing as we can no longer maintain our way of life, our culture. We lose our collective way of life.

To date, the government says things like “we built a bridge, we’re helping with climate change mitigation,” but there is no real strategy, indicators or engagement with communities to put a strategy in place.

That is what we want.  Many communities already feel the effects – glaciers are reducing, in the Andes water is less accessible and we have to walk further to get it. Rivers are overflowing in the Amazon. 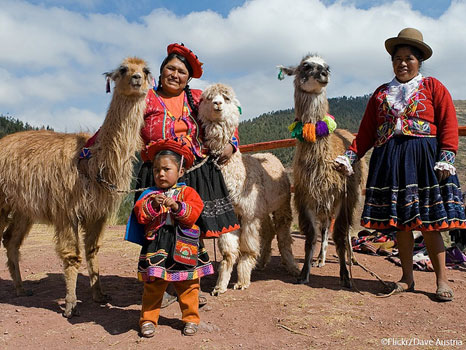 We used to plant chakra next to the river, now we cannot. Our food security has already been impacted.  For centuries our people have relied on mother nature to dictate when to plant and when to  harvest, and now there is no regularity for us to rely on.