Why are indigenous people sidelined at UN climate talks?

Indigenous people have the solutions to climate change. They should be allowed to speak out at the UN climate talks 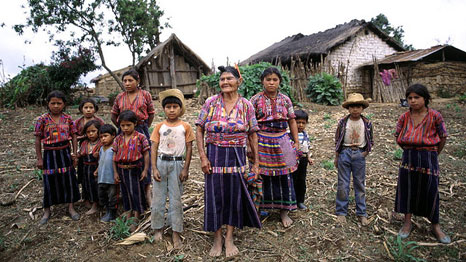 A Cakchiquel family in the hamlet of Patzutzun, Guatemala (Pic: UN Photo)

Indigenous people are one of the most vulnerable groups to the impacts of climate change.

They stand to lose so much because, as well as relying on the natural environment and biodiversity for their livelihoods (often in fragile ecosystems), their entire worldview or ‘cosmo-vision’ is intertwined with and based on complex interactions with nature and the environment.

Indigenous people are also made vulnerable by their widespread and continuing neglect and marginalisation in national, regional and international climate change policy. Unfortunately, this state of affairs is no surprise; the false but prevalent portrayal of indigenous peoples as homogenous, backwards and vulnerable is a product of colonialism.

Furthermore, if policy responses are to be effective, including at the UN climate talks, participation of these communities and the integration of their knowledge, priorities and worldview is critical.

Climate change is a global problem but its impacts are local and vary significantly by location. Indigenous people have been adapting to changes in the environment for centuries, and have become highly attuned to changes in their own landscape.

As a result, indigenous communities have developed a number of strategies and methods with which to adapt to change and which provide resilience.

Assessments conducted by the Indigenous Peoples’ Biocultural Climate Change Assessment Initiative (IPCCA) on every continent, and representing every major type of ecosystem, have demonstrated that many of these adaptations are already underway as the climate changes.

These include: diversifying and supplementing natural resources, altering and modifying key species and biodiversity, shifting timing cycles and calendars, adjusting locations, and collective resource management, among others.

Yet these skills and knowledge are too often neglected and overlooked by the broad technical and scientific approaches of the climate change policy apparatus, despite the fact that this knowledge provides capacity for community based adaptation.

Many international groups are already engaging with indigenous communities, effectively or otherwise.

But participation of indigenous communities within these groups is a major issue, with varied opportunities for them to take part in each.

At the last UN conference in Warsaw, the International Indigenous Peoples Forum on Climate Change statement called for an Indigenous Peoples’ Expert body to be set up. This would contribute to the design, implementation, monitoring and evaluation of all subsidiary bodies, activities, mechanisms and programmes.

Also, it called for establishing a technical support unit for indigenous peoples’ issues and an indigenous focal point in the UNFCCC Secretariat, which should be established under the adaptation, technology transfer, capacity building and science programmes.

Finally, it asked for a dedicated fund mechanism for the participation of indigenous people’s organizations in climate policy-making processes and should support mitigation and adaptation activities at ground level.

Such mechanisms would ensure the inclusion of indigenous people’s voices, solutions and knowledge in climate change decision-making at all levels.

There are several more intangible barriers that continue to exclude indigenous voices from climate change policy.

These include the marginalisation, exploitation, and cultural imperialism imposed on indigenous communities, often in the name of climate change mitigation or adaptation.

More than this, for indigenous communities, top-down technology-based approaches to climate change are not only inadequate but counterproductive.

These lessons are a few of the cornerstones of our forthcoming Synthesis Report, based on the IPCCA’s worldwide local assessments of indigenous communities and climate change. This will be presented at the UN’s next climate conference in Lima.

There has never been a more opportune time to discuss this issue at an international level.

In the last few years, the push for the integration of indigenous people and knowledge in the climate change landscape has gained pace.

But critically there has still been very little practical action to involve indigenous communities in coming up with climate change solutions that link evidence on the ground to policy development in the UNFCCC.

Therefore, the IPCCA proposes that existing best practices in indigenous peoples participation should be applied, such as those exercised by the Convention on Biological Diversity, which has defined problems and identified solutions from a wide variety of viewpoints, including those of indigenous peoples. This has increased understanding of the interlinked problems facing biodiversity and society, including indigenous human rights.

This should open a process for a full and effective participation of indigenous peoples in all processes at the UN climate talks. Openness to conflicting claims and views would increase the credibility of an already discredited UN Convention.

Now is the time for the climate change community to rally behind this cause.