Brazil tribe teams up with tech company to save rainforest 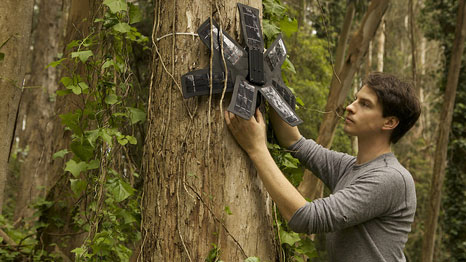 Smartphone devices are hidden in the trees, where they detect sounds of chainsaws (Pic: Rainforest Connection)

Indigenous people in Brazil have joined forces with a San Francisco tech start-up to protect the Amazon rainforest from illegal logging.

The company, Rainforest Connection, takes discarded smartphones and transforms them into solar-powered listening devices that register the sounds of chainsaws and trucks in areas where logging is illegal.

The phones then send alerts to rangers and officials, allowing them to respond and prevent deforestation occurring. Now, 30 members of the Tembé tribe are being trained as forest rangers, empowering them to stop unlawful incursions onto their land.

“The technology being developed by Rainforest Connection is an extremely powerful tool for the protection of rainforests, especially in our case, when combined with the on-the-ground presence and determination of local indigenous groups serving as guardians of their traditional lands which occupy over a quarter of the entire Amazon region,” said Vasco M. van Roosmalen from Equipe de Conservação da Amazônia, which is running the training programme.

The advantage of the project over traditional satellite monitoring systems is that it transmits real time information directly to those who are able to respond, offering the best chance to stop illegal loggers in their tracks.

Deforestation in the Amazon threatens the rights of indigenous people, biodiversity, and contributes to climate change by destroying a valuable carbon sink. 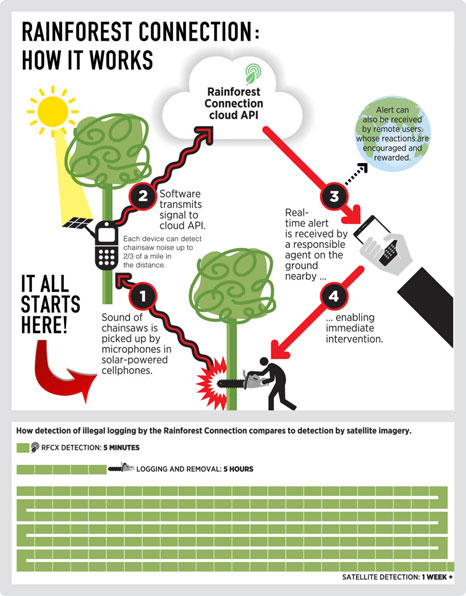 The Tembé people, with a population of 1,500, have a strong incentive to stand up for the rainforest. They recently recovered their rights to around 600,000 hectares of lost land, but protecting the area has been a challenge, and they have reported massive illegal logging operations.

Despite measures by the Brazilian government to tackle illegal logging, a two-year investigation by Greenpeace released this year claimed that the problem was still “out of control”, and that in Para State, the country’s largest producer and exporter of timber, 78% of logging is illegal.

The black market for illegal timber puts indigenous people’s lands under threat, and drives climate change through cutting down these large stores of carbon.

Rainforest Connection is also planning an additional pilot project in the Mamoni Valley Preserve in Panam. Partnering with the Guna indigenous population of Panama, this would eventually protect thousands of acres of rainforest threatened by logging.

Musician Neil Young has supported the project. “Through the power of sound, this technology can give the forest a voice,” he wrote in a letter. “When the forest is threatened, the forest can speak. And for the first time, you can hear it.”