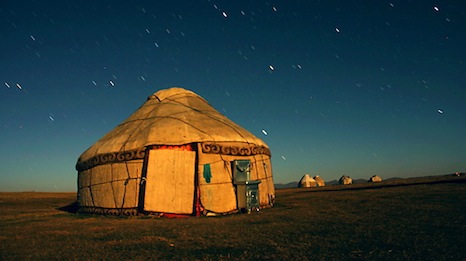 Traditional knowledge in Kyrgyzstan, like how to build a yurt, is transmitted by the elder generations (Pic: dwrawlinson/Flickr)

In early April, the villagers of Samarkandek, Kyrgyzstan, react with a curious enthusiasm to the sight of apricots coming into bloom.

As soon as the flowers emerge, old and young gather for the Festival of Blooming Apricots to recite poetry, sing and dance in celebration of the oncoming harvest.

It may sound like a quaint old custom upheld mainly by history enthusiasts – think wassailing in England – but in fact this particular festival is an innovation.

It is more than an attempt at cultural revival. Kasymov hoped that, by bringing together elders with younger generations, they would be able to pass on their old traditions, once practised by pastoral communities, but now fading fast.

The Kyrgyz people have started to realise that such skills, now all but vanished from their collective memory, could prove vital in helping them deal with the changes that climate change is set to impose on their landscape and their way of life.

“Elders can tell their experience. To pass knowledge from generation to generation, we organise workshops on horticulture, against pests and diseases. During this workshop we use traditional knowledge and a scientific approach,” said Kasymov.

“Each time people bring more and more products and some technologies. We revive some traditional knowledge on the processing of products and cultivating apricots.” 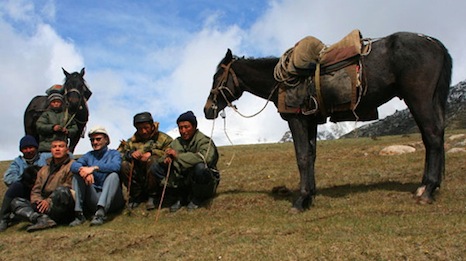 Indigenous knowledge spans an array of themes, which evolved to make nomadic life in Kyrgyzstan’s mountainous landscape more comfortable, including skills such as building and decorating a yurt, raising cattle on natural fodder, and traditional recipes such as kuurma tea.

But on top of that, it also includes knowledge on how to live sustainably and deal with the vagaries of the earth and weather: skills such as grafting, planting and caring for livestock.

The idea of using traditional knowledge to inform climate adaptation decisions is beginning to gain some traction, from the tribes of the Amazon to the diplomats of the United Nations.

“’In recent years there has been a growing awareness that scientific knowledge alone is inadequate for solving the climate crisis. The knowledge of local and indigenous peoples is increasingly recognized as an important source of climate knowledge and adaptation strategies,” said a 2012 report from UNESCO.

But the last decades of Kyrgyz history, which experienced the rise and then the collapse of the Soviet Union, have tested the endurance of the traditional knowledge that could provide the key to adapting to the impacts of climate change. 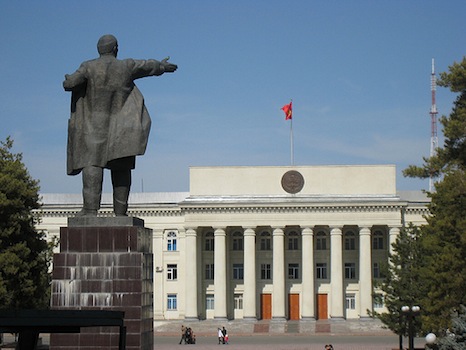 A statue of Lenin still watches over the capital, Bishkek, albeit in a smaller square than before the collapse of the USSR (Pic: Travir/Flickr)

Seventy years of the Soviet centralised economy and state ownership of land, accompanied by a ban on studying the pre-Soviet history of the Kyrgyz people, meant that traditional knowledge and methods of farming were lost behind the iron curtain.

Land ownership was dramatically restructured, with 560 collective farms dismantled into hundreds of thousands of private peasant farms. Large scale migration from rural areas into cities and other countries interrupted the pattern of the elders transferring their knowledge to the younger members of their family.

Kyrgyzstan has been described as a natural Eden. In the canopy of its wild walnut forests, which cover around 41,000 hectares, grow apples, plums, maples, pears, cherries and other fruit. Across the country, over 40 different varieties of apricots bulge onto the branches to be harvested.

These natural resources are also something of an agricultural promised land for the country, which has battled to recover after its GDP dropped by 50.7% in four years following the collapse of the Soviet Union.

Now, agriculture makes up around 30% of Kyrgyzstan’s GDP.  The harvested apricots, for instance, are either consumed locally or shipped off to Tajikistan, Kazakhstan and Russia, generating US$85-128 million for the economy. 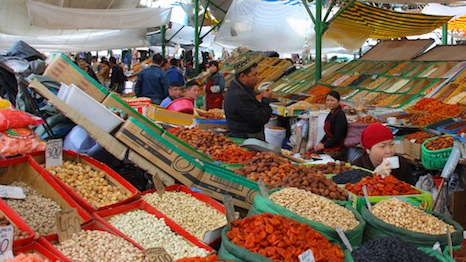 Fruit and nuts are sold at a bazaar in Bishkek, the capital city of Kyrgyzstan (Pic: neiljs/Flickr)

According to their National Communication on Climate Change, submitted to the UN in 2009, temperatures in some parts of the country are predicted to rise by up to 8.4C. Scientists have said increases above 2C could prove disastrous.

For the 65% of the population who live in rural areas, this could make life very difficult. Glaciers are expected to decline and water resources – of which 92-96% are currently consumed by agricultural irrigation – become scarce. Meanwhile, more landslides, avalanches and rockfalls will put lives at risk.

In May 2012, locals reported they took only 30% of the 15,000 tonnes of nuts that are usually gathered, due to heavy rain damaging the walnut flowers.

“Often we have late spring frost, and early autumn snow some years. When trees are blossoming, or some agriculture crops are growing, they can be lost and farmers don’t have any harvest,” explained Kasymov.

“A couple of years ago, we had first snow on 3 September. It was very unusual and it was very negative for farmers because most of them had just started to harvest and all their crops became useless after the snow.”

Losing these resources would not only harm the economy and livelihoods of those who rely on them – thousands of Kyrgyz and Uzbek people live in villages in the walnut forests – but would also destroy a precious asset for maintaining crop diversity in the future, for both Kyrgyzstan and its neighbours.

Crop diversity can help to ensure food security, improving the resilience of each year’s harvest to changes in the climate, or to the pests and diseases that may increase as a result of this.

The value of these Kyrgyz forests have been recognised since they were celebrated by early Soviet botanist Nikolai Vavilov, the Russian scientist who headed the Lenin All-Union Academy of Agricultural Sciences from 1920-40. 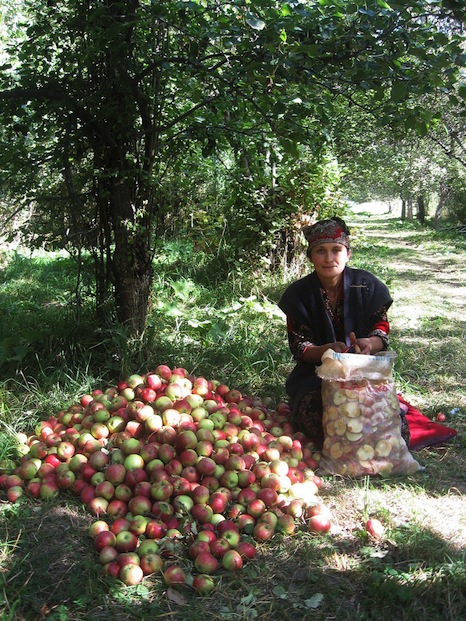 A young Kyrgyz woman collected apples for sale and consumption (Pic: National Academy of Sciences of the Kyrgyz Republic/K.Musuraliev)

At a recent meeting in Bhutan, a network of 25 indigenous mountain communities agreed to set up a seed-swapping network to help their farming systems cope with the coming changes.

“We have 100 apple varieties in Kyrgyzstan, and I think neighbouring countries – Kazakhstan, Uzbekistan, Tajikistan, China, and others – are also interested. But also we can exchange seeds of other crops: wheat, barley, potato, and other vegetables,” said Kasymov.

Other initiatives to restore traditional practices in Kyrgyzstan are also afoot. One Kyrgyz group, the Rural Development Fund, has run a series of projects designed to catalogue and disseminate the fading skills of community elders, including through a Summer Fair of Traditional Knowledge and a Treasury of the Kyrgyz People’s Knowledge.

“Kyrgyz people, our parents, they somehow lived in harmony with nature,” said Kasymov. “Farmers and custodians of traditional knowledge, they have very rich experience even now.”