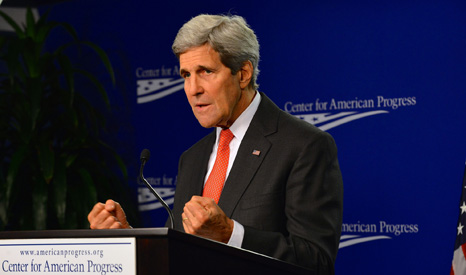 India and the USA can develop one of the world’s ‘defining partnerships’ that can help tackle global issues like climate change.

That’s the view expressed by US secretary of state John Kerry, speaking ahead of a visit to Delhi where he will co-chair the fifth Strategic Dialogue session between the countries.

In a speech at the Centre of American Progress think-tank in Washington DC, Kerry said he wanted to use the meeting to show “how the US and India can tackle global challenges… peace in the Pacific, clean energy, inclusive growth”.

“What we do to strengthen global security and a rules-based international system, how we turn the challenges of climate change into an opportunity for greater cooperation and economic growth – these are the big challenges. These are opportunities for us,” he said.

“Even as we focus on crises and flashpoints that govern the talkshows… we will also act with long term strategic interests foremost in my mind,” he added.

US special envoy on climate change Todd Stern is one of the officials accompanying Kerry, with the US keen to see how the new Indian government views ongoing plans for an emissions reduction treaty at the UN, set to be signed off in 2015.

Calling for bilateral trade links to grow US$100-500 billion a year, Kerry said US expertise in clean energy could help India develop a cheap and green electricity grid and transport networks.

India is now the fourth-largest energy consumer in the world after China, the United States, and Russia, with its 249 gigawatts of installed electricity generation capacity powered mostly by coal.

Kerry also warned that ignoring signs of climate change, such as an erratic monsoon, falling crop levels and flash floods in Uttarakhand was not an option for the country’s 1.2 billion citizens.

“For millions of Indians, extreme weather and resource shortages are not future threats; they are here now. They’re endangering their health and prosperity and security every single day,” he said.

“Climate volatility is clearly taking a toll on India’s population. And so is pollution. Of the 10 cities in the world with the worst air quality, six are in India. Each year in India, the effects of air pollution cause nearly 1.5 million deaths,” he said.

Despite an impressive track record in developing the solar industry while chief minister of Gujurat,  India’s new prime minister has been fairly quiet on the share of clean energy India should target in the coming decades.

Modi has said he will drive a ‘saffron energy’ revolution, involving an increase in solar deployment, although it remains unclear if this will be matched by a drop in coal use.

French foreign minister Laurent Fabius says he is “impressed” with the approach of Modi towards UN climate talks, claiming India would be a “major player” at future negotiations.

The country’s environment minister Prakash Javadekar has also indicated he may change the country’s approach to UN talks, promising a more proactive approach.

But it remains unclear if the world’s fourth largest carbon polluter will commit to any emission cuts ahead of next year’s proposed UN deal.

Previous governments have rigidly maintained developed countries need to make the toughest cuts arguing India’s priority is to alleviate poverty and provide affordable electricity to the millions currently off grid.