France and India pledge to cooperate at UN climate talks

French Foreign Minister says India will be a ‘major player’ at 2015 Paris summit, backing Modi to deliver a new approach 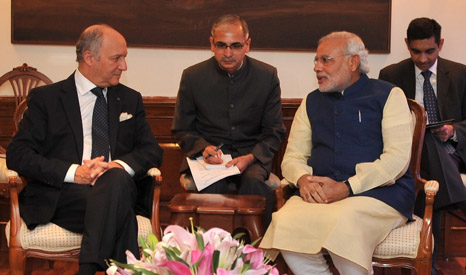 France and India will work closely together on a proposed UN climate deal, according to French foreign minister Laurent Fabius.

Speaking after a meeting with new Indian prime minister Narendra Modi in New Delhi, Fabius said they had explored ways of deepening cooperation ahead of the 2015 Paris summit.

“We discussed climate change and have been positively impressed by the approach of prime minister Modi and his ministers,” he said.

“And we have decided to prepare for the Paris conference together and it is important because India is a major player in that conference.”

Historically India has been reluctant to pledge to cut its greenhouse gas levels, citing high levels of poverty and the need to develop.

Modi has said he will drive a ‘saffron energy’ revolution, involving an increase in solar deployment, although it remains unclear is this will be matched by a drop in coal use.

As part of that cooperation, Fabius announced a $1.4 billion credit line to finance green infrastructure and urban development.

And in a speech at the Energy and Resources Institute (TERI), he outlined plans to work together on offshore wind, ocean thermal energy, nuclear power, urban development and suggested a third Indo-French satellite could be launched to gain a better understanding of weather patterns.

The French government has made achieving a UN climate treaty next year a diplomatic priority, instructing all embassies to reach out to host governments on the issue.

Fabius is seen by many as the face of the meeting, and holds monthly meetings with minister of the environment Segolene Royal to discuss planning.