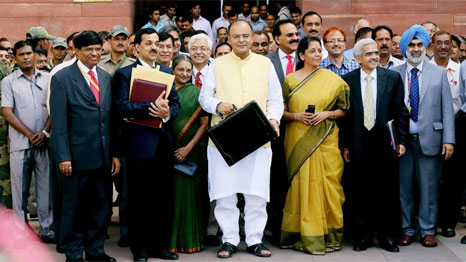 The budget, presented today by finance minister Arun Jaitley, is the first time that the government has explicitly set aside domestic funds for climate adaptation, and is the first real test for India’s new leader Modi.

“Climate change is a reality which all of us have to face together. Agriculture as an activity is most prone to the vagaries of climate change,” said the finance minister, unveiling the budget at the Indian parliament in New Delhi.

He said the establishment of “National Adaptation Fund” would focus on providing funds to agriculture – a sector which contributes towards almost one sixth of India’s GDP. This is to be replenished with an initial sum of Rs 100 crore (around US$ 16.5 million).

India’s landscape and economy are vulnerable to the impacts of climate change, due to its 8,000 km of coastline and its dependence on rain-fed agriculture and fisheries.

Yet the government has so far been reluctant to take action directed specifically at adaptation, preferring to focus efforts on mitigation, including renewables, efficiency and improved urban planning, as part of its eight “National Missions” on climate change, launched in 2008.

But observers were still in some doubt on whether this money would prove effective.

The Adaptation Fund must first be established before the funds can be disbursed, and even then deciding how to spend the money over India’s 3 million km land mass.

“Adaptation is by definition a local issue, so different people have different needs,” said Jyoti Parikh, a member of the Prime Minister’s advisor council on climate change. “Prioritisation is harder. Mitigation is easier: it’s more about technology.”

Nitin Sethi, an environmental correspondent at the Business Standard in India, expressed further concern that the Adaptation Plan was a “mere token” from a government wanting to prove it was engaging with climate change.

“The real test of the government lies in funding and supporting the existing eight climate change missions, which includes adaptation in urban areas, water resources and agriculture sector besides the ones on energy efficiency and solar power,” he said.

“The economic survey put out yesterday shows India is slipping on several of them and that the missions have fallen from the political agenda of the government in previous few years.”

The budget also provides a boost to renewable energy, which came as no surprise, given Modi’s apparent enthusiasm for solar power during his time as chief minister in Gujarat.

Jaitley announced that the government would provide Rs 500 crores (around US$ 80m) to set up “ultra mega solar power projects” in four states: Rajasthan, Gujarat, Tamil Nadu and Laddakh.

He allocated a further Rs 400 crores for solar-powered pumps for use in agriculture, and another Rs 100 crores for the development of 1 MW solar parks on the banks of canals.

Many of the materials needed to develop wind and solar plants were exempted from excise duty, which is likely to provide an incentive to develop renewable energy. The doubling of India’s clean energy cess – a levy on coal, peat and lignate used to finance clean energy initiatives – will be another lift.

Equally, the government looks set to continue to rely more heavily on fossil fuels in the future – there are still around 400 million people in India without access to electricity, and Modi’s decisive victory in May was largely attributed to his promises of development for all.

But claims that this is a wholly green budget need to be placed into context.

Alongside a pledge to provide 24/7 power supply to all homes, Jaitley announced that he would enhance coal production, while exploiting old wells of petroleum and natural gas as a “clean” source of energy.

India has the world’s fifth-largest coal reserves, and according to the US Energy Information Administration ranked third largest in terms of both production and consumption in 2012.

Despite the prospect of more investments in the most carbon intensive of fossil fuels, NGOs say the news must be taken with a dose of realism.

“One should look at it positively,” said Vashist. “India is going to remain dependent on coal for years to come. But simultaneously they are investing in renewable technologies. Unless they have a sustainable and reasonable option, then no country is going to switch over to cleaner technology.”

India’s promised development will also depend upon how it deals with a growing urban population, greater pressures on its transport system, and its management of its natural resources.

Its success in tackling climate change in the future will be partly determined by its ability to ensure this development is sustainable.

Improved infrastructure, crucial for development, will help to resolve the problem of food loss – an issue that is set to get worse in India as the planet warms.

Currently, up to 40% of fruit and vegetables perish en route to their destination, according to Tim Fox, head of environment and energy at the Institution of Mechanical Engineers, who was in India when the budget was announced, and recently launched a study on food loss in countries facing climate change threats.

Fox said that the improvements to infrastructure announced in the budget could make headway in tackling this problem. “Investment in roads and energy supply, particularly green energy supply, will help food get where it needs to go.”

Details on other programmes remain sketchy, but the new budget hints at greater integration between development and climate agendas, with promises to build 100 smart cities, new Metro systems and a National Centre for Himalayan Studies.

“The budget demonstrates that the government of India is creating infrastructure for everybody, which is important for growth and sustainable development,” said Vashist.

“We need to ensure that this development happens with the least carbon footprint.”