India’s vulnerability to extreme weather was exposed this week when floods killed at least 600 people with thousands reported missing.

The monsoon arrived early in the northern state of Uttarakhand, bringing with it 375% more rain than in previous years.

The sheer weight of water that hit an area known as India’s ‘holy land’ is hard to overstate. It suffered 60 hours of continuous and heavy rains coupled with cloudbursts between Friday 14 June to Monday 17 June 2013.

This resulted in increasing water level and floods in the Alaknanda and Bhagirathi rivers, which the NGO ActionAid say was what triggered the massive devastation of infrastructure and loss of lives.

But along with thousands of people and their livestock, poor planning and coordination at state and national level has been savagely exposed, raising serious questions over India’s climate adaptation strategy. 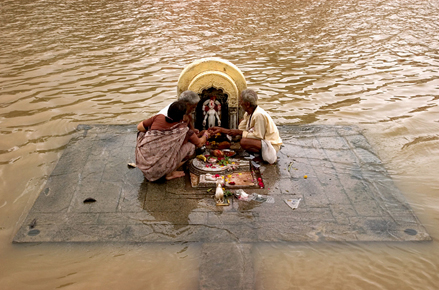 “According to the plan, flood management is a state matter and therefore the fund allocation for flood management differs across regions and may not always match with the vulnerability or the proneness of the region,” Neha Rai, International Institute for Environment and Development told RTCC.

“For example, Uttarakhand has much lower financial allocation for flood management than other parts of the country.”

Debabrat Patra, ActionAid regional manager for Uttarakhand told RTCC the situation could get worse: “Our partners in the region have reported that nearly five thousand people are still missing in Kedarnath, presumed dead,” she said.

“People are at a loss as to where to start search and rescue. We expect more rains in the coming days and weeks and the situation may get worse and hinder the search and rescue work underway now.”

Experts agree that inadequate government regulation of land use, messy and haphazard construction, and rapid cutting of trees in Uttarakhand can also be attributed to the flood in the region.

Confusion stretches to the top.

In an interview with RTCC on Friday, Dr. Satendra from India’s National Institute of Disaster Management was unable to decide whether the cause of the flooding lay with local or central governments.

He did acknowledge that in order to accommodate the deluge of pilgrims and tourists at this time of year, residents constructed unsafe housing, suggesting the government’s duty was to educate the communities about climate change, how to combat it and provide damage limitation strategies.

India has already invested 2 lakh crores (US$3.4 trillion) in strategies for the future in its 12th development plan for 2012-2017.

This includes cutting emissions and developing renewable technologies, although experts say implementation of these is held back by the government’s lack of political will.

The 2008 National Action Plan on Climate Change explicitly states that two-thirds of forest cover in Himalayan regions must be maintained, advice ActionAid’s Sehjo Singh says was ignored by local authorities.

“The large scale deforestation and massive construction projects, especially large dams and hydro-power projects, have weakened the ecosystem of the region and the accompanying effects of climate change is further galvanizing the destruction.”

There is also evidence a disaster on this scale had been coming.

India’s Controller and Auditor General warned three years ago that “more than 200 hydropower projects and massive deforestation in the state had overlooked environmental concerns, which could be catastrophic in the event of a flash flood,” Singh added.

ActionAid climate adaptation expert Harjeet Singh says the international community needs to put together a body of scientists and coordinators with the ability to compensate people that have suffered as a result of disasters such as the one in Uttrakhand.

Although the government is yet to confirm an exact figure in terms of financial loss, the Times of India says recent floods have been far more destructive economically.

Experts appear to agree the level of rainfall was made more likely as a result of climate change.

“The flood in Uttrakhand is not a new story. Many parts of the country (such as Uttrakhand) are experiencing intense rainfall in short durations during the summers and extreme dry spells in the winters.

A study by scientists at the National Atmospheric Research Laboratory in Tirupati showed a 14.5% increase in frequency of heavy rain in India between 1951 and 2004, reported Indian newspaper The Hindu.

Flooding is not a concern limited to India but throughout the sub-continent. “Bangladesh, Nepal, Bhutan and Pakistan all face interlinked flooding problems resulting from heavy monsoon rains and overflow of their common major river systems,” notes Rai.

“In Nepal water melting from Himalayas is one of the main causes for flooding. Emergency response during flood times is slow because villages are quite spread out and some of them are very remote. In Bangladesh, coastal flooding and rise in sea levels are the main cause. The increased concentration of population and high density of the country adds to the problem,” said Rai.

Harjeet Singh said that although individual countries in the region are working quite hard to adapt to climate change, the region as a whole is not working together due to India and Pakistan’s turbulent history.

He notes that Bangladesh is the climate adaptation leader in the region having invested heavily in early warning systems, followed by Nepal.

And unfortunately for the residents of Uttarakhand, this is unlikely to be a one-off event.

“What we are currently experiencing is a world 0.9°C warmer than pre-industrial temperatures,” warned Nagraj Adve, an activist based in Delhi.

“Due to the lag between carbon emissions and global warming, a significantly warmer world is inevitable, as are more extreme events. What has happened this year is going to happen, again, often, and more intensely.”