China and US presidents to attend Ban Ki-moon climate summit

EXCLUSIVE: Barack Obama and Xi Jinping are on “a very long list” of leaders signed up, says UN climate chief 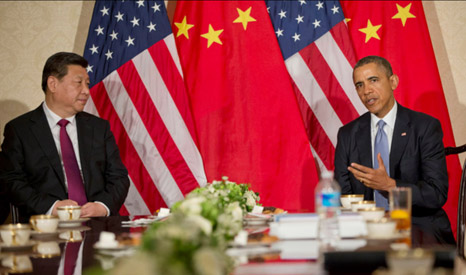 Barack Obama and Xi Jinping are set to attend a climate summit hosted by UN secretary-general Ban Ki-Moon in September.

The US and Chinese heads of state are on a “very long list of confirmations” to attend the one-day conference in New York, according to UN climate chief Christiana Figueres.

The summit is an opportunity for world leaders to showcase the action their countries are taking on climate change and to make fresh pledges.

Business, city and civil society leaders have also been invited to take the microphone with their contributions.

Figueres said: “It is a very exciting day, in which we will see played out in front of us the huge variety of climate action.”

The idea is to build momentum for a global treaty next year in Paris, but its success depends on buy-in from the top of major economies.

“We are very confident that heads of state will come,” Figueres told RTCC. Asked if that included China and the US, she said: “Yes, definitely.”

Obama’s office confirmed his participation to the National Journal.

A spokesperson from Ban Ki-moon’s office denied having a list of attendees, but said: “We are very encouraged by the large number of positive responses from heads of state and government and we are expecting as many of them as possible to attend to the summit.”

Over one million campaigners are expected to descend on New York the day before the summit starts, in what organisers are calling the “largest ever climate march“.

The US and China are the two single largest emitters of greenhouse gases.

The two powers discussed climate change at high-level talks earlier this month and both have made steps towards cutting emissions.

Meanwhile, China is steadily cutting the carbon intensity of its economic growth and has indicated it could present plans for an emissions cap as early as next year.

Figueres said the US announcement was “very welcome” but said more would be needed to reach a global deal in Paris.

“No country is doing enough to stay on the path of a 2C temperature rise,” she said. “The agreement in Paris will be looking at that.”

Countries are due to put forward plans for their national contributions to mitigating climate change by March 2015. “All countries are very very busy doing their homework,” said Figueres.

That includes Australia, which will still be expected to contribute despite a U-turn on its core green policy last week.

“The challenge here for Australia is, since they are very committed to a global agreement in Paris, that means they need to go back to the drawing board.”