US and China set for latest climate change discussions 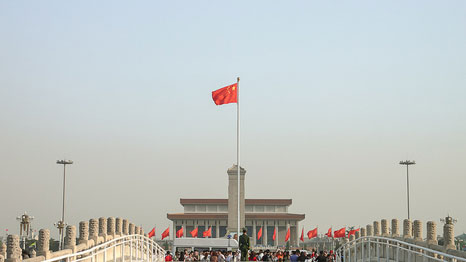 The US and China will discuss climate change during a high-level talks taking place this week in Beijing.

How the US and China plan to reduce their carbon footprints could unusually prove one of the more harmonious topics during the sixth Strategic and Economic Dialogue, the most important annual discussion between the world’s two largest emitters.

The bilateral relationship between the US and China has been fraught following maritime disputes and the indictment of five Chinese military officers in Washington in May over cyber hacking.

But climate change is expected to remain a “positive area of cooperation”, said Barbara Finamore, Asia Director at US-based Natural Resources Defense Council, who is currently in Beijing for the talks.

“I think the leaders at the S&ED can and will separate out the opportunities for collaboration on climate issues from the difficulties we face,” she said.

Wheels up and #Beijing-bound to join @USTreasury Sec. Lew in the U.S.-#China Strategic & Economic Dialogue. pic.twitter.com/LByw26kn22

Climate change is a divisive topic in US-China relations, but one that both countries have officially stated their determination to resolve.

But their efforts are complicated by opposing attitudes in the two countries on China’s future development and who should take responsibility for the problem of global warming.

Overcoming these differences is central to global efforts to tackle climate change. Together, these two countries are responsible for around 40% of the world’s greenhouse gases.

In 2009, the two countries tightened their bilateral cooperation with seven joint initiatives on clean energy, coal and electric vehicles, and a US-China Climate Change Working Group was established at last year’s S&ED.

According to the US State Department, this is “intended to spur large-scale, cooperative efforts to address the climate challenge, including deepening and expanding work already underway.”

Addressing journalists yesterday, State Department spokesperson Jen Psaki said that this year’s round of discussions is expected to yield “expanding cooperation” within this platform.

Both the US and China have signalled their determination to take domestic action on climate change ahead of a UN summit in Paris 2015, where all countries will sign a global agreement.

For China, the key issues are how to combat its choking air pollution, and when it will be able to peak its CO2 emissions. Emissions in the US are already declining, but will need to decline much faster if the world is going to stay below an internationally agreed limit of 2C of warming.

A study released this week by Jiang Kejun, director of the Energy Research Institute at China’s National Development and Reform Commission, said that China could peak its emissions by 2025, but that it will need US$ 453billion every year by 2030 if it is to stay on a 2C pathway.

In an interview, Jiang emphasised the need for foreign collaboration to achieve these goals.

China is currently working on its 13th Five Year Plan, the blueprint for its policies between 2016 and 2020. An absolute emissions cap should be a “serious consideration” for this period, he added.

This week’s round of talks is not expected to deliver anything in the way of new targets – these are more likely to emerge for UN deadlines in September and March – but is an important opportunity for the two sides to consider their domestic and international efforts, said Changhua Wu, director of The Climate Group in China.

“I don’t think there will be anything dramatic in terms of decisions made at this moment but this is a very important time where two big countries come together to talk about sharing their views, perspectives, and even discuss each other’s positioning in the global process,” she said.