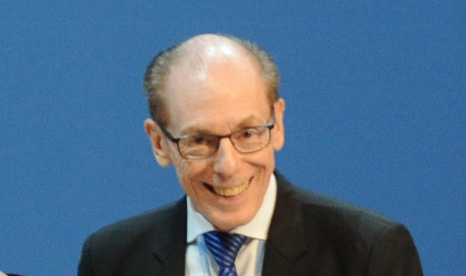 It’s fashionable, and perhaps sensible, to be sceptical over the potential for a successful UN climate change deal in Paris next year.

The auguries are mixed. Previous efforts, such as Kyoto in 1997 and Copenhagen in 2009, have either failed to achieve their ultimate goal, or ended in acrimony.

Talks that have now lasted the best part of two decades are still stuck on some fundamental issues. Who cuts? Who pays? Whose fault is climate change?

With negotiations on ice, temperatures outside and the levels of carbon dioxide, the main cause of climate change, are on an upward trajectory.

A recent report from the UN’s IPCC climate science panel said CO2 emissions need to be halved by 2050 to have a chance of avoiding temperature rises of 2-4C by 2100.

So it comes as a surprise to find the UN’s number two climate change official, a Canadian called Richard Kinley, surprisingly chipper in his new office, a former German Parliament building in Bonn, now coated with solar panels.

“In the signals we get from governments I really do feel we want to have an agreement in Paris in 2015,” he says.

“It’s not going to be easy because the differences of conception and interest are significant, but I think what’s different is they really want to make a go of this one.”

Kinley has been involved in the talks since they began in the early 1990s, briefly taking charge in 2006, and since then supporting Yvo de Boer and now Christiana Figueres as Executive Secretary of the UN Framework Convention on Climate Change.

He was at the heart of the Copenhagen summit in 2009, billed then as the golden chance for multilateralism where countries would cooperate for the common good.

Instead it ended with a shabby deal crafted by a few governments in the small hours, leaving the world on a trajectory for dangerous levels of warming.

“Before Copenhagen I probably believed there was a willingness to have an outcome…but as I’ve looked back I’ve come to the conclusion that probably was not to be,” he says.

“If you look at the state of play of negotiations when we went into the COP [Conference of the Parties] it was very messy, it was terrible. Hundreds of pages of text with options and brackets…How could we go from that in ten days to a product that leaders would be ready to agree at the end of the conference?”

For many observers, negotiators and journalists, the experience of Copenhagen was – and is – proof that a global climate change deal is impossible.

Kinley – perhaps unsurprisingly – sees it differently, describing the events of the Danish capital as “cathartic”.

From those smouldering embers, he says, were born the foundations of the current set of talks – a commitment to avoid 2C of warming, an acknowledgement all countries must be involved, and a UN-backed bank to help poor countries invest in a green future.

Separately, falling renewables prices, soaring air pollution in the developing world and a growing divestment movement are also indicators of a change in the wind, perhaps offering a firmer base for any agreement.

But the Copenhagen collapse also exposed another factor, perhaps just as important – the misplaced belief that a UN deal could solve a problem as complex as climate change, which requires nearly 200 countries to fundamentally change their economic growth patterns.

“In the early days when we were much younger and naïve we felt the international negotiations and agreements could be the driving force for solving the climate change problem. Our sense now is that was not a very good analysis,” he says.

The 1997 Kyoto Protocol, which applied legally binding greenhouse gas reductions on all developed nations bar the USA, was a “good model” that failed, says Kinley, because what he terms the “key players” were not involved.

This time round, the world’s three major emitters of climate warming gases – China, the USA and EU – are all deeply involved in crafting the deal set to be signed next year.

Diplomats from all three groups are involved in an intensive schedule of flights, bilateral meetings and wider gatherings to assess what level of carbon cuts they can get away with offering in 2015.

Kinley describes the ongoing meetings between Beijing and Washington, which involve high-level officials, as “hugely important”, joking that they allow him to “sleep a bit better”.

“Major players have to be involved, or we’re not going to solve the problem,” he says.

Other major polluters such as India, Brazil, Mexico and Russia appear to be watching this set of talks closely, and are likely to use whatever they deliver as a benchmark for their own pledges.

What’s clear, says Kinley, is that past hopes that a tough UN treaty would – on its own – force major powers into swift carbon cuts are unlikely to be realised.

He sees what’s called a ‘bottom up’ approach, where countries determine what they are going to do, mixed with a set of legal requirements imposed by the UN as a potential match-winner.

“My sense is that we will end up with a system that is fundamentally based on the foundation of bottom up but is complemented by some kind of top down periodic assessment review, stock taking, however it is characterised,” he says.

“This has to take as its starting point the 2C goal, the reality of how much the atmosphere has and can take…All of these things would need to be considered with the objective that this can be ratcheted up after Paris.”

Key to all of this will be the levels of cash on offer for developing countries, says Kinley, to allow them to make the necessary changes to their energy systems, and prepare for future climate impacts.

In 2010 developed countries agreed at the UN to deliver $100 billion a year to boost green growth in the global south.

Conservative estimates on what is really needed from economists like Lord Stern now run into the trillions, a figure at odds with what is currently on offer.

Japan, the world’s fourth largest economy, currently budgets for around $4 billion of climate finance a year, while the UK says it will provide $4 billion over a five year period between 2011-2016.

It’s due to open for business in a few months, but its future is still unclear, with a bickering board unable to agree on how it will operate.

“Finance is crucial this year,” says Kinley. “We’re all looking to the GCF and hopefully the board’s work will be concluded in a few weeks to set the stage for a string capitalization of the GCF, which would be a positive and important signal.

If the final outcome still appears shrouded in mystery, then at least the road to Paris is fairly clear.

A series of high level meetings – some organised by the UN, others by the G20 and G7, pockmark the route.

These more informal gatherings are likely to determine the level of political support for a climate deal, and build the momentum Paris will need if it is to deliver an ambitious outcome.

Ban Ki-moon’s ‘Climate Leader’s Summit’ is perhaps the most high-profile of these, a chance says Kinley for leaders to wash away the “sour taste” left in their mouths from Copenhagen.

But he says smaller bilateral gatherings will be just as important, calling on governments to negotiate more between official UN sessions.

“I have the distinct impression there is a lot of talking between people who have the same opinion but discussions across groups are not as common as they need to be and as they are to other important economic and political leaders,” he says.

Central to the process is France’s Elysee Palace, which has already instructed all its embassies to place climate change at the heart of their strategies over the next year.

Anxious that 2015 does not become another Copenhagen, the French government has already started extensive preparations for the summit, choosing a vast airfield in the north of Paris for the meeting’s main venue.

Former French Prime Minister Laurent Fabius is likely to assume ‘Presidency’ of the meeting, which Kinley hopes will not require ministers or heads of state to engage in bartering over technical issues, as in previous years.

“We’re all much less convinced that having senior people negotiate complicated issues is actually particularly helpful in the end,” he says.

“It is good when they can help break a deadlock on a clear particular policy question which ministers can decide, but too often in the past we have asked them to deal with technical issues they have no business being involved in.”

Between now and then, a strict timeline has been laid down for national negotiating teams.

A draft text must be ready for the main 2014 climate summit, due to take place in Peru in December.

The figures detailing how what level of carbon cuts each country is prepared to make are due by March 2015 at the latest, with a final draft of the text set to be ready by June.

But will all the world’s leaders be ready to sign on the dotted line in Paris, especially those from developed nations, wary of being sold a duff deal?

“For me an element of this is there still is a need for more leadership from industrialised countries,” says Kinley.

“If emissions in industrialised countries are still going up, we have not reached the point when…a rubicon has not been crossed. It would be very difficult for developing countries to accept they have to do a lot more until that threshold has been passed.”