ANALYSIS: UN climate deal hangs on the launch of a new green fund – but splits at board level could see this delayed 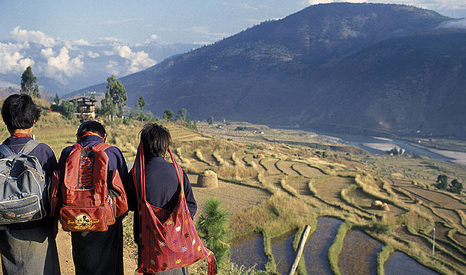 Countries vulnerable to climate impacts, like Bhutan, can expect to benefit from the new fund (Pic: World Bank)

The UN-backed Green Climate Fund is the glue holding global talks on greenhouse gas reductions together.

Promises of billions – perhaps trillions – of dollars flowing into low carbon projects in developing parts of the world keep the prospect of a UN climate deal in 2015 open.

So far these have not materialised, and without the prospect of these funds, emerging economies and other poorer regions say committing to any carbon cuts will be impossible.

The GCF, which recently opened its new headquarters in Songdo, South Korea, is supposed to smooth this process, and help rich countries meet a 2009 pledge to deliver $100 billion a year by 2020.

But the time for the UN’s prized fund to deliver is rapidly approaching, and there are growing fears that all is not well.

The GCF board’s last meeting ended having agreed on just two of the eight requirements they needed to sign off before it can start filling its coffers. It gathers one more time in May before the fund is scheduled to open.

If the GCF is not fit for purpose by the end of the summer, it’s unclear if developed countries will make any financial commitments ahead of the UN’s main climate summit in Lima.

That’s a political nightmare for the UN and negotiators desperately trying to work out how a global emissions reduction deal could work.

The stakes were raised two weeks ago when Switzerland’s Environment Ambassador Franz Perrez accused a group of developing countries of trying to sabotage the fund in its infancy.

He told RTCC: “My impression is that some developing countries like the Philippines who are now co-chairs purposely slow down the process, but also others from the LMG [Like Minded Group of Developing Countries] in the executive board.”

Perrez continued: “We have the impression that the LMG is trying to slow down the process within the board so that the GCF will not be ready by Lima, and if it’s not ready by Lima we cannot pledge, and then they will have a pretext to say ‘the developed countries always promise and they never deliver’.”

These are intriguing allegations, given the role the GCF is set to play in helping avert dangerous levels of climate change, the consequences of which were compared recently by a US Army General  to a ‘100-year war’.

The LMG is 19-strong, made up of a diverse collection of countries, ranging from Saudi Arabia, China, Venezuela, Sudan, India and Iran.

Viewed by many developed country negotiators as serial ‘blockers’ at UN talks, LMG members regard themselves as standard bearers of fairness and equity, holding rich nations to account for their historical responsibility.

Perrez’s views are unfair and “fallacious”, according to Meena Raman, a veteran NGO observer with the Geneva-based Third World Network group. “It’s mind boggling to suggest that…it’s developing countries who are screaming for finances to come in,” she says.

“Where there are hiccups it’s because there needs to be a bridging of divergences between developed and developing board members of how they see the fund.”

Raman’s last comment touches on an unspoken truth at the GCF. While it is meant to be a cure for rows between rich and poor countries, its construction has, perhaps, just opened up another front in that battle.

Board members closely involved in the talks are cautious about aggravating any tensions.

But Germany’s Norbert Gorissen, head of the country’s International Climate Finance division, does say he “had doubts” over whether all board members at the last meeting were focused on working in a “constructive, pragmatic and results oriented manner.”

“We had two days which hardly achieved anything, and on the third we delivered what we had,” he says.

May’s meeting needs to be a success, according to Gorissen, to win over the sceptics and build confidence in the business community.

“We need the political will to come to a result, not to delay it or make things bureaucratically more complicated,” he said.

Pakistan’s representative at the GCF, Farrukh Khan, rejects any suggestion countries are “blocking”, but admits discussions have been tough and are behind schedule.

“I believe that we have the capacity to address those concerns, the potential, and we are doing the right thing,” he says. “It’s very important. Climate finance is a conundrum which will make or break the treaty we are talking about.”

Perhaps one of the greatest challenges – one that looks like it was grossly underestimated – is the sheer scale of the task facing the 24-strong board and GCF Secretariat.

In a matter of months they are expected to create a bank capable of dealing with billions of dollars, generating a ‘paradigm shift’ towards low-carbon and climate-resilient development pathways.

“I still struggle to work out what that means, and I think a lot of them probably have their own differentiated expectations of what that means,” says Andrea Rodriguez from the Mexico-based NGO Aida-Americas, a GCF observer. “People want different things from the same institution.”

Rodriguez adds that some board members from developing countries lack the time and backing to fully prepare for meetings, explaining why some have proceeded so slowly.

“Some have advisors with them, others don’t even know if they’ll be at the next board meeting, others haven’t had time to read the papers and make any comments.”

Khan says given their task, patience is in order, warning against trying to steamroller decisions for short-term gain.

“I think these are all very difficult issues, and we are trying to build something which is different from the existing architecture of climate finance,” he says.

It’s not just the board that is struggling to keep up.

Many forget the GCF’s Secretariat is still not at full strength – it’s currently advertising for two legal experts and four senior consultants – and is struggling to cope with the workload.

Gorissen worries that its recent move from Bonn to Songdo means it lost much of its “institutional memory”, leaving the ever-changing board to pick up the pieces and drive its construction forward.

Among the six remaining items on the board’s list, the role and scope of private financing is perhaps the most contentious and politically sensitive.

It cuts to the heart of arguments over who should take ‘responsibility’ for addressing the high levels of carbon dioxide in the atmosphere.

Initially the GCF is expected to have its coffers filled by governments, but few believe they will be able to provide the trillions (or kajillions) that economists like Lord Stern say are required for a low carbon ‘paradigm shift’.

“At any point in time the fund must not rely only on government to give the money and channel it, but rather be able to raise its own financing,” Khan says.

Around $10bn a year was produced between 2010-2012 by wealthier nations, but the Overseas Development Institute says that has dropped by a third.

A recent call from China for $490 billion by the end of the decade was largely ignored at a recent UN set of talks.

Gorissen insists developed countries are “already ready or are preparing to be ready” to make pledges once they have assurances over how the money will be used.

“That’s not an issue for compromise, because we have to justify to our taxpayers and parliaments that the money is spent in a way that we can defend,” he says.

But for some observers that is a sign ‘developed’ countries are just trying to avoid shelling out too much money until the private sector can get involved and take over.

“In my mind the main struggle is the lack of any numbers on the table. You’re negotiating the sum of zero,” says Raman, pointing to around $40m of pledges so far, all to help the fund’s administration.

At the Bali meeting a panel of civil society and bank experts was set up to look at all private sector activities of the GCF, a move many say is ground-breaking in the world of climate funds.

This group, which includes the CEO of the $28bn Pension Denmark fund and the Managing Director of Siguler Guff and Company, which has $10bn of assets under management, is expected to explain how the GCF can work best with major investment funds.

“It will have a really big private sector facility,” says Rodriguez, “but we just don’t know how it will work.”

This lack of clarity means the next meeting May is likely to be a testing affair, especially given added pressure from governments to get this tied up by Ban Ki-Moon’s climate leaders’ summit in September.

A raft of questions remains unanswered.

Who will be allowed to disburse the cash? How will projects be assessed?  To what extent will developing countries exercise control over GCF initiatives on their home turf? Is there any money out there?

And after a feisty Bali meeting that degenerated in squabbling over what class GCF board members could fly in, what will the atmosphere be like amongst the fractured board?

“I don’t think it is in any group’s interest to block the GCF or the process that we are initiating,” says Khan. “I believe that we have the capacity to address those concerns.”

Gorissen, audibly impatient at the sloth-like progress so far, emphasises the importance of the board working as a team towards a common goal, not as two sides competing against each other.

“We need to work as the professional board of a fund, not as negotiators of the UNFCCC, with line by line negotiation…starting on principles and key technical elements of the fund,” he says.

No-one to whom RTCC has spoken believes the GCF’s remaining tasks are impossible. Observing from the sidelines, Rodriguez says the unpredictable politics remains the largest obstacle.

There remains a gulf primarily between developed countries and select groups of developing countries, which will need more thoughtful discussion to unpack.

“The next meeting will be difficult. It’s not just that its technical, but it’s politicised. Discussions over country ownership mean different things depending where you are,” she says.

“Until you get common agreement on the main concepts I think it’s hard to move forward.”