Crises in Syria and Ukraine have distracted world leaders from the urgency of climate change, says UN chief 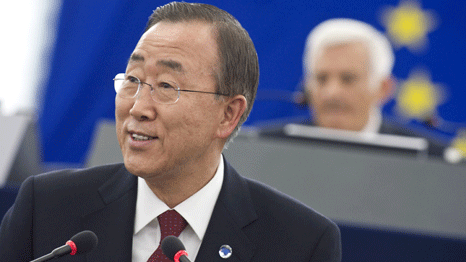 World leaders take a “narrow minded” approach on climate change, and are too frequently distracted by the issues that will gain votes in the next election, according to UN Secretary General Ban Ki-moon.

Speaking in Brussels today, he said that domestic concerns, along with the crises in Syria and Ukraine, had “distracted” leaders from taking action on climate change.

“When we regret it will be too late. That is my message to world leaders, who are very narrow-mindedly looking only on their national agenda,” said the normally placid Ban Ki-moon.

“Of course they have to be re-elected. When I talk to leaders very passionately, [they say] ‘Secretary General, don’t worry. I’m supporting you and I’ll always do what you say, but if I want to help you I need to be re-elected, so let me be re-elected first then I’ll come back to you.’

“By that time I’ll have to leave my job.”

Great to have a UN @secgen with such a strong and genuine dedication to fight #climatechange. Praise for his constant push for gvts to act

Last week, Ban Ki-moon travelled to Greenland to highlight the impact that warming was having on the Arctic ice and raise awareness ahead of a climate change summit he will convene in September at the United Nations Headquarters in New York.

His communication advisors questioned the trip, he said, as being out of line with global events at the time. Along with the escalating crisis in Ukraine, other world leaders, including President Obama, were gathering in The Hague that week for a Nuclear Security Summit.

But, he said, “this may be more important”: while climate change may not seem as immediate a problem as the crisis in Ukraine, it requires an urgent response. He added that he saw climate change as a top priority in his mandate as Secretary General.

On the crisis in Syria, he said that it may be very important and tragic, but that addressing climate change was about saving “the whole of humanity”.

“My objective has been pressed on member states who have been focusing more on domestic issues. I have been urging them, ‘Please, leaders, look beyond national boundaries. The whole of planet earth and global earth, they are suffering and they will suffer tomorrow, if not today.’”

Domestic issues in Europe were responsible for the delay on finalising the European Union’s climate and energy package last month, said Ban.

The package, which sets out a 40% greenhouse gas reduction target by 2030, could have formed the basis of the EU’s pledge at Ban Ki-moon’s summit in September, but a Council meeting in March saw the final decision pushed back till October.

The agenda was instead dominated by the political crisis in Ukraine and Europe’s dependence on oil and gas from Russia, said Ban.

He urged Europe to lead the way ahead of September’s crucial summit by finalising the 2030 package at the forthcoming Council meeting in June.

He said: “While world leaders have been distracted and focused on Ukrainian situations, we should never lose our sight on this very important issue of climate change.”