US and China to speed up climate change co-operation

US and China say they will step up efforts to improve emissions standards in cars, buildings and power plants 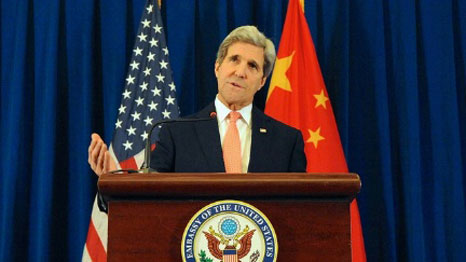 China and the US have agreed further co-operation to cut carbon from power generation, buildings, industry and transport as the world’s two largest emitters try and refine efforts aimed at slowing their contribution to climate change.

At a meeting in Beijing between US Secretary of State John Kerry and Chinese President Xi Jingping at the weekend, the countries said they would step up co-operation and sharing of information on how best to reduce greenhouse gas emissions after 2020 as part of future climate deal to be negotiated in Paris at the end of next year..

“China and the United States will put an extra effort into exchanging information and discussing policies that will help both of us to be able to develop and lead on the standards that need to be announced next year for the global climate change agreement,” Kerry said at a visit to a Sino-US plant that makes cleaner engines for cars.

China and the US last year set up the Climate Change Working Group to improve co-operation in low-carbon cars, smart grids, carbon capture and storage and energy efficiency in buildings and industry and is aiming for a deal on these measures to be inked at a Sinco-US summit later this year.

“This is a unique cooperative effort between China and the United States, and we have hopes that it will help to set an example for global leadership and global seriousness on the issue of next year’s climate change negotiation,” Kerry said on his factory visit.

US companies are keen to take advantage of efforts to reduce carbon emissions in China, which in turn wants to help up build expertise in low carbon technologies to cut energy use, improve air quality in chronically polluted cities and develop domestic expertise in green industries.

Tesla, a US maker of electric cars, plans to build a network of charging stations to power-up  its S-class model in China, where sales could overtake the US by the end of next year, the company said last month.

Meanwhile US makers of energy efficient appliances and technology, such as General Electric and United Technologies, are eyeing the potential for smarter power grids and greener buildings in China’s fast-expanding cities.

But China’s reliance on coal will mean that US cooperation with China may barely make a dent on the country’s CO2 emissions unless it speeds up efforts to switch to renewables and bury greenhouse gases from power generation, a technology that is largely unproven on a large scale.

And at the dirtier end of the lobbying scale, the US resources industry is pushing hard for new terminals to export coal to Asia and a lifting of the ban on crude oil exports, which green groups say would heighten the contribution of the US to Chinese carbon emissions.