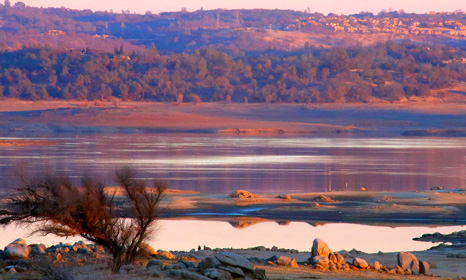 The US President was responding to questions at a news conference over plans for the Keystone XL oil pipeline, which his Administration is currently reviewing.

“I said previously that how Keystone impacted greenhouse gas emissions would affect our decision, but frankly it has to affect all of our decisions at this stage,” he told reporters in Mexico.

Canadian Prime Minister Stephen Harper is desperate for the pipeline to be approved, but Obama said he would not be rushed into making a decision.

“I know it’s been extensive and at times, I’m sure Stephen feels, a little too laborious,” Reuters quote him as saying.

The fate of the pipeline is seen by many climate campaigners as a test of Obama’s commitment to addressing the issue.

Retweet if you’re ready for Congress to accept the science and #ActOnClimate.

If the $5.4 billion project is built, some estimate it will contribute an extra 181 million tons of carbon dioxide equivalent (CO2e) per year, and encourage further development of Canada’s polluting oil sands.

This week Obama announced new fuel efficiency standards for trucks, which could cut US emissions 10%. He also outlined plans for a $100 million climate resilience plan for California, which is suffering from severe drought.

New data from the National Oceanic and Atmospheric Administration (NOAA) suggests January’s land and sea temperatures were the fourth warmest on record.

By the end of January California’s reservoirs were at 50% of capacity, and most mountains bare of snow.

On February 12 the State Department submitted plans for a global climate change deal to the UN, and two days later the White House launched a $1 billion climate resilience package.

The proposals come in a week that leading Republican Senators launched their toughest attack yet on the Obama Administration’s climate policies.

John McCain and Newt Gingrich, both former supporters of ambitious climate action, tore into Secretary of State John Kerry for suggesting global warming was as dangerous as weapons of mass destruction.

In an interview on a Phoenix radio station McCain questioned Kerry’s state of mind, asking “what planet does he reside?”

He said: “Why should he talk about climate change, when we’ve got a 130,000 people in Syria killed, and…the whole Geneva thing was a fiasco, the Iran-U.S. talks are obviously a joke, and the Palestinian-Israeli negotiations haven’t even begun.”

Former Speaker Gingrich, who in 2008 said the country “must take action to address climate change,” called on Kerry to resign in a series of tweets. “Every American who cares about national security must demand Kerrey’s resignation. A delusional secretary of state is dangerous to our safety,” he said.

I apologize to bob kerrey for spelling john kerry’s name as though he were bob’s relative. Callista caught my error. Please edit to kerry