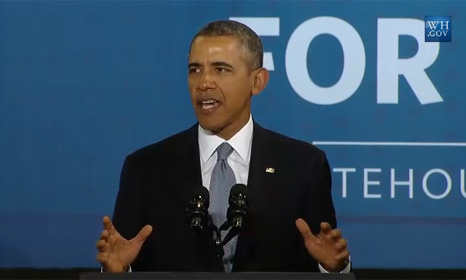 In a speech at the Maryland branch of the US Supermarket chain Safeway Obama said he had instructed the Environmental Protection Agency (EPA) to start work on a new set of measures for trucks.

“We’re gonna double the distance our cars and trucks and go on a gallon of gas from 2025,” he said, adding “These are areas where ambition has worked out well for us – don’t make small plans make big plans.”

Trucks and lorries account for around 4% of registered vehicles in the USA, but are responsible for 25% of greenhouse gas emissions from the transport sector.

A previous round of standards announced in 2011 meant manufacturers of medium and heavy duty trucks had to achieve a 20% efficiency saving rating, which the White House says will save $50 billion in fuel costs equal to 530 million barrels of oil.

.@rtcc_edking Manufacturers investing now to meet 2014-2018 standards and EPA and DOT we’ll work with them closely on the next round

Obama used his speech to repeat a call for Congress to end subsidies to oil and gas companies and create an Energy Security Trust Fund to fund research and development for advanced vehicle technologies.

“The president’s decisive action to ensure more efficient cars and trucks is adding up to huge climate pollution reductions for our planet and massive savings for American drivers at the pump,” he said.

“We have the technology to nearly double the fuel economy of tractor trailers, and now we need to put it to work.”