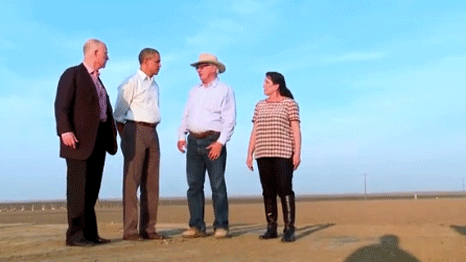 Obama visited California on Friday, which is having some of its driest weather in 100 years (Source: White House)

During a visit to drought-affected areas in the state, Obama reaffirmed the importance of tackling climate change, and announced extra funding to bring short-term relief to impacted communities.

He told ranchers in the state that he would speed up access to US$100 million, promised in the Farm Bill signed off last week, which will help farmers to maintain their livestock in the face of extreme water shortages.

He also pledged an addition $15 million to help some of the hardest hit communities across California and five other states build more sustainable farms.

This is designed to ensure better conservation of scarce water resources and the reduction of wind erosion on dry, dusty fields following droughts.

“We have to be clear: A changing climate means that weather-related disasters like droughts, wildfires, storms, floods are potentially going to be costlier and they’re going to be harsher,” said Obama.

“Droughts have obviously been a part of life out here in the West since before any of us were around and water politics in California have always been complicated, but scientific evidence shows that a changing climate is going to make them more intense.”

The weather, he said, supported the case for taking action to “combat carbon pollution” – the long term goal of a UN treaty to be signed in 2015.

The US will be instrumental in whether the negotiations leading up to this date are successful. An obstinate Congress meant that the Kyoto Protocol was never ratified by the US.

In another show of US determination to act on climate change, Secretary of State John Kerry yesterday warned that it could end up being a “fearsome weapon of mass destruction” during a speech in Indonesia.

Climate change means that extreme weather events are now something for which the US needs to be prepared, he added. He said that the next budget will include $1 billion to make the country more resilient to such events, including improvements to infrastructure and technology.

California has the biggest economy in the US, and is its largest agricultural producer. Obama stressed that this means what happens in the state will have far-reaching implications across the rest of the country.

“What we have to do is all come together and figure out how we all are going to make sure that agricultural needs, urban needs, industrial needs, environmental and conservation concerns are all addressed.”