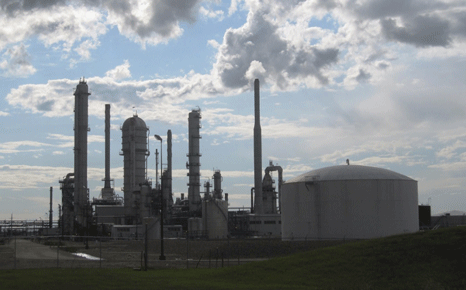 A new report says the air downwind of Canada’s largest oil, gas and tar sands processing zone has higher levels of contaminants than in some of the world’s most polluted cities.

The findings by UC Irvine and University of Michigan scientists reveal high levels of the carcinogens and other airborne pollutants in Alberta’s ‘industrial heartland’.

“We’re seeing elevated levels of carcinogens and other gases in the same area where we’re seeing excess cancers known to be caused by these chemicals,” said UC Irvine chemist Isobel Simpson, lead author of the paper in Atmospheric Environment.

The researchers captured emissions in the rural Fort Saskatchewan area downwind of major refineries, chemical manufacturers and tar sands processors owned by BP, Dow, Shell and other companies in the so-called “Industrial Heartland” of Alberta.

In the US, Shell has a programme in conjunction with the University of Texas which offers employees and their dependents cancer screening sessions.

The team compared the Alberta plumes to heavily polluted megacities. To their surprise, the scientists saw that levels of some chemicals were higher than in Mexico City during the 1990s or in the still polluted Houston-Galveston area.

A report last month showed that by 2100, up to three million people could be at risk of dying if leaders do not take action against greenhouse gas emissions.

The researchers obtained health records spanning more than a decade that showed the number of men with leukemia and non-Hodgkin’s lymphoma was greater in communities closest to the pollution plumes than in neighboring counties.

While the scientists stopped short of saying that the pollutants they documented were definitely causing the male cancers, they strongly recommended that the industrial emissions be decreased to protect both workers and nearby residents.

“For decades, we’ve known that exposure to outdoor air pollutants can cause respiratory and cardiovascular disease,” Co-author Stuart Batterman, a University of Michigan professor of environmental health sciences, said. “The World Health Organization has now also formally recognised that outdoor air pollution is a leading environmental cause of cancer deaths.”

Ottawa MP David McGuinty told RTCC earlier this year that stopping the exploitation of the tar sands in Alberta would be impossible.

He also pointed out that a large proportion of the electorate were unconcerned by the risks posed by the region’s energy activities.

He said: “The government are not going to try and win the sustainability popularity contest because they have proven they don’t need to.”

The peer-reviewed study is one of few in the region and more investigation of the large and complex facilities is needed, say the researchers.

For example, Simpson said, it appeared in some cases that the companies were not reporting all of the tons of chemicals they release. She and her colleagues documented high levels of 1,3-butadiene that could only have come from one facility, but she said the company had not reported any such emissions.

Simpson said: “Our main point is that it would be good to proactively lower these emissions of known carcinogens. You can study it and study it, but at some point you just have to say, ‘Let’s reduce it.’ ”

BP, Shell and Dow did not reply to requests for a comment.