A leading Canadian Liberal MP says it is ‘delusional’ to think the exploitation of the Alberta Tar Sands can be stopped in the coming decades, urging environmentalists to rethink negative campaigns that he believes are counter-productive.

Ottawa MP David McGuinty told RTCC environmental groups should concentrate on the benefits low carbon growth can provide, arguing efforts to target the oil sands or the Keystone XL pipeline in the USA are attacking the symptom but not the cause of the problem.

Royalties from the production of oil in Alberta are predicted to top $1.2 trillion over the next 30 years. Canada’s west coast is fiercely protective of its energy resources, and McGuinty says that despite clear environmental concerns, shutting the operation down is not an option for any government.

“Anyone who says [you can] is delusional – you can’t shut down the tar sands in 15 years, anymore you could shut down Venezuelan oil in 15 years. Let’s talk about a 50 year trajectory,” he said.

“Canadians are tired of hearing the negativity – they want more hope – as opposed to just focusing on the challenge. Whenever you bring change there are always new opportunities, always new economic and intellectual opportunities.” 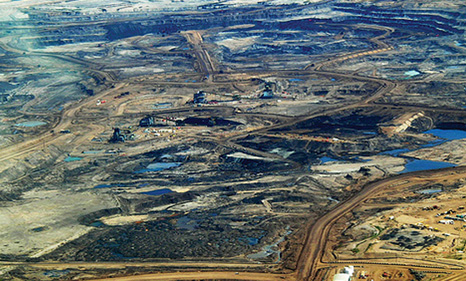 Alberta’s Oil Sands are the third-largest proven crude oil reserve in the world, next to Saudi Arabia and Venezuela. Production is expected to increase to 3 million barrels per day by 2018

Shouting about new jobs from clean energy policies is one tactic. McGuinty says his focus now is demonstrating the economic and employment benefits that can come from the low carbon economy, which the Ontario Ministry of Energy estimates is worth $250 billion.

“We need to change the message and say, ‘look – if we work here to keep temperature increases to an acceptable level we can give rise to new industries and protect the fresh salmon you like to eat,” he said.

“The messaging in my view has to be termed; it’s not ‘I’m afraid’ but ‘Are you kidding – this is a great opportunity?’ We’re embroiled in a communications war and we’re not winning it.”

Oil extraction from tar sands is contentious because of the high levels of energy used in production, together with the scale of damage to the surrounding environment as the sands are dug out.

McGuinty points out that this does not appear to concern a large proportion of the electorate, which is increasingly focused on economic growth, and less bothered about climate change and ecological degradation.

“The government are not going to try and win the sustainability popularity contest because they have proven they don’t need to,” he said.

On the contrary, the current conservative government has proved stunningly successful at making enemies in the green movement.

In addition to increasing the exploitation of tar sands, in December 2012 it withdrew from the Kyoto Protocol, arguing it was no longer effective, and has encouraged fossil fuel exploitation around the Arctic Circle.

And despite signing up to the US-led Climate and Clean Air Coalition, a non-binding treaty to reduce levels of short-term atmospheric pollutants that cause climate change, Prime Minister Stephen Harper referred to UN climate legislation as a “socialist scheme”, writing that carbon dioxide is “essential to life”.

This week the 2013 GLOBE Climate Legislation study reported Canada’s policies had ‘regressed’ over the past 12 months, a situation GLOBE President John Gummer described as a “sad scandal”.

Gummer, who is the UK government’s chief independent climate advisor, said he was “ashamed as a Conservative” of Canada’s decision to ditch Kyoto.

These decisions have sparked a series of political flashpoints in the Canadian Parliament over the past year, where the debate has become ever more polarised and personal.

Liberal MP Justin Trudeau called Environment Minister Peter Kent a “piece of shit” during a debate on Kyoto in December 2011, while recently Green Party MP Elizabeth May found herself shouted down in Parliament after asking a question about climate change.

In November McGuinty resigned as a shadow minister after accusing Alberta MPs of being ‘shills’ [stooges] to their region’s oil sand producers. He admits it can cost political capital to take on what is a large and effective fossil fuel lobby inside and outside the government.

“This is a new approach to politics in Canada, building on the Republican and Tea Party experience in the USA,” McGuinty said, adding: “Whenever you try to raise a conversation based on climate you’re shut down by a well-oiled attack machine that says ‘you’re trying to kill the economy’.”

Last week Canada’s minister for Natural Resources Joe Oliver accused opponents of fossil fuel exploitation of being ‘environmental radicals’ seeking to ‘hijack our regulatory system’, but a political opportunity may emerge in 2013 if the Obama administration decides to take action on the climate. 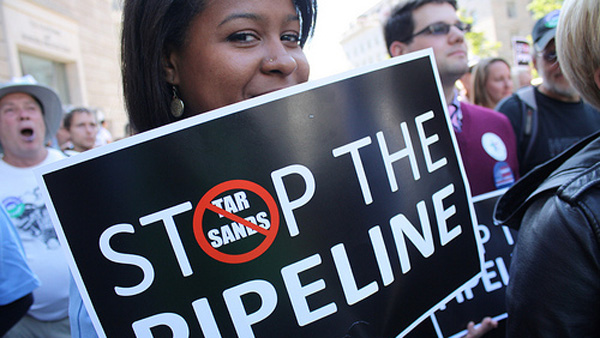 No new policies have been announced by the White House but the appointment of John Kerry as Secretary of State and promise to hold a climate summit this year suggests it could take some leadership this year.

In addition, virtually all of Canada’s energy exports go to the USA, which could be threatened by Obama’s promise to ensure ‘energy sovereignty’, forcing Ottawa to think about either finding new markets or scaling back production.

Whatever route Washington goes down, McGuinty hopes that campaigners direct their focus on the government’s long term plans for energy and the climate. He believes this will prove a more effective strategy than warnings of a ‘climate disaster’, and expose an intellectual vacuum at the heart of the Harper administration.

“Keystone is just another flashpoint. Keystone today, Rockview tomorrow,” he said. “It’s this fixation on project by project. It’s not going to take us anywhere. It’s a great story for the media – characters and conflicts.

“But this does not make a national energy approach – we’re not even having an adult conversation in Canada. There is no plan on the climate.”