The Greater Gabbard wind farm cost £1.3 billion to construct, and will supply power to 500,000 homes 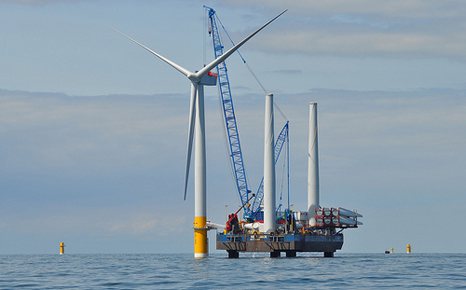 The Greater Gabbard is located off the coast of Suffolk. (Source: DECC)

The second largest offshore wind farm in the world, costing £1.3 billion (US$2 billion) opened today 23km off the coast of Suffolk.

The 504MW Greater Gabbard installation with 140 turbines is capable of generating enough clean electricity to power over half a million homes, more than the domestic electricity demand of Suffolk.

The developers, SSE renewables and RWE npower renewables are already planning doubling capacity by 2017 having received Development Consent in May.

“Greater Gabbard has already brought jobs and wider benefit to the local community, with hundreds of people employed on site, and a £150,000 fund created to support local initiatives, which will be managed by Suffolk Community Foundation”, said energy and business minister Michael Fallon.

It plans to break this record with a 1,200MW project unveiled recently by energy chief Ed Davey.

“The potential for our industry is huge and actually being the leader gives a potential for exports and potential to learn how to innovate and how to get the cost benefits from large scale deployment,” he told RTCC in an interview.

“I think it’s right that we are leading – the problems we’ve seen in the past has been that Britain has been a follower and as a result we’ve had to actually end up paying more because we’re depending on other suppliers and we’ve not had the industrial base development with the jobs that come to that.”

This includes £20 million from the Regional Growth Fund to improve the UK wind industry’s supply chain, and £46 million to join up innovation between industry, Government and academia and help companies to bring new products to market.

Offshore wind has the potential to provide enough clean power for 11 million homes in the UK by the end of this decade, creating 30,000 jobs and contributing £7 billion to the economy.

The government has set a target of 16GW of offshore wind power capacity by 2020, and John Lang, from trade association RenewableUK says this is a realistic objective provided the government continues to support the development of wind in the UK.

“With regards to hitting our targets we are still confident we can reach 16-18GW of offshore wind by 2020, but for this to happen investors need to have confidence that there will be a positive policy framework in the UK, which will help convince them that this country is the best place to invest.”

RenewableUK data indicates the UK has 21 operational offshore wind farms with an installed capacity of 3,653MW – enough to supply nearly two and a half million British homes with clean electricity.