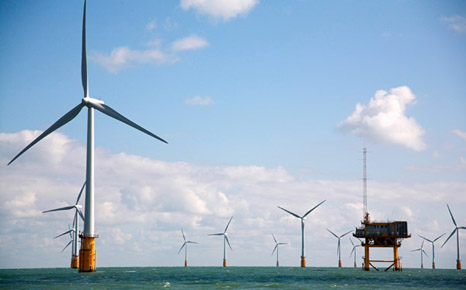 The UK has been the world leader in offshore wind since October 2008, with the most installed capacity in the world (Pic: Vattenfall)

The UK is set to break its own record for the world’s largest offshore windfarm after a 288 turbine 1,200MW project was unveiled by energy chief Ed Davey.

Located off the Lincolnshire and Norfolk coast, the Triton Knoll Offshore Wind Farm will cost £3.6 billion, creating over 1,000 jobs and providing power to 820,000 homes.

The project would surpass the 175 turbine London Array, which was officially opened by UK Prime Minister David Cameron last week.

The UK is frequently described as the ‘Saudi Arabia’ of offshore wind, although critics point to high capital costs and say energy from wind can be irregular, placing stress on the grid.

Construction has also started on the 76 turbine Pen y Cymoedd Wind Farm in South Wales. Costing £400 million, it could one day be the largest onshore wind site in England and Wales.

“Offshore and onshore wind is an important contributor to our energy mix,” said Energy Secretary Ed Davey in a statement. “We have provided certainty early to onshore and offshore wind investors and now see significant investment decisions being made that will benefit the UK’s economy for years to come.”

The news comes in a week where a report by think tank IPPR accused the government of undermining the offshore wind sector, and backtracking on an ambition to secure 18GW offshore wind by 2020.

The report argues that as a result the industry risks missing out on an additional 15,000 jobs that could be created by 2020.

“The industry should be given the long-term clarity that it needs, and which has been provided in other countries,” said Will Straw, associate director at IPPR.

“A 2030 target for the carbon intensity or share of renewables in the power sector is a necessary condition as are long-term 20 year contracts. But developers must be expected to drive down costs with a subsidy regime that reduces the strike price over time.”

In other news, a report from the UK Department of Energy and Climate Change claims the UK could gain a £1.9 billion boost if energy efficiency measures were employed by large companies

It says UK companies that invest in energy efficiency measures could see savings of £56,400 per year on their electricity bills.

Firms with 250 of more employees will be required to undertake energy saving assessments.

“These new energy saving assessments will help our largest firms identify where money can be saved by installing energy efficiency measures.”