Based off the Kent coast, the London Array boasts 175 turbines which have a total capacity of 630MW – enough to power nearly half a million homes a year.

“This is a great day for Britain and a big win for renewable energy,” the Prime Minister said at the inauguration.

“London Array shows you can build large scale renewable energy projects right here in Britain. This is because when it comes to clean energy, the UK has one of the clearest investment climates globally.” 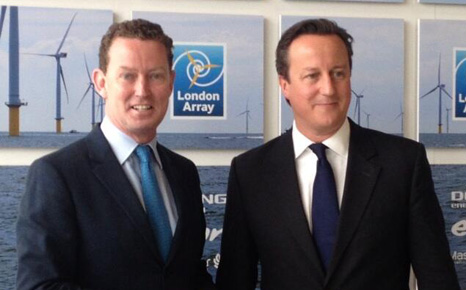 Located 20km off the coast, the windfarm has been in operation since April. A possible second phase could add enough capacity to bring the total to 870MW.

The presence of the Prime Minister at the opening has been welcomed by many UK clean energy supporters, who have accused Cameron of shying away from green issues.

Green groups also gave a cautious welcome to the launch, while arguing that the wind and solar sectors need more policy certainty to thrive.

“The London Array shows what the UK can potentially achieve with renewable energy. We’re now world leaders in an industry that some wrongly dismissed in the past as a nice-to-have,” said Greenpeace executive director John Sauven.

“But if offshore wind is to continue to provide jobs and economic growth for the UK and reach price parity with nuclear by the 2020s, David Cameron needs to do more than ribbon-cut.

“He needs to give the sector long-term certainty by agreeing to cut carbon completely from our electricity sector.”