UK outlines strategy to be ‘world leader’ in offshore wind 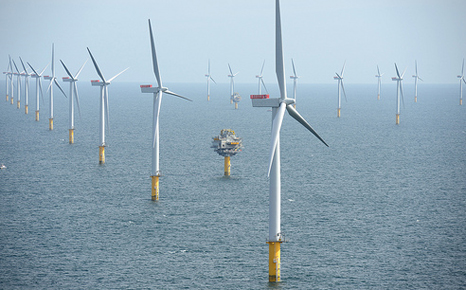 The UK has announced a multi-million pound strategy to strengthen its position as a leading player in the offshore wind industry.

At the inauguration of Centrica Energy’s Lincs £1 million, 270MW wind farm in Lincolnshire today, UK Deputy Prime Minister Nick Clegg and the Energy Secretary Ed Davey said the government’s strategy has the potential to unlock £7 billion (approx. US$11 billion) in the economy by 2020.

Speaking at the official launch of the Industrial Strategy at the opening of the wind farm, Clegg said: “The race is now on to lead the world in clean, green energy. As an island nation, and with our weather, the UK is ideally placed to make the most of offshore wind energy – you could say it was a technology designed for us.

“This strategy will help keep Britain as the world leader in one of the most important industries of the 21st Century. If we make the most of offshore wind’s potential in the UK, it can provide a big proportion of the energy that lights our homes and powers our economy.”

Through this strategy the government is aiming to create an environment in which entrepreneurs find it easy to start and grow a business, and to pursue demand-management policies which stimulate growth and maintain financial stability, through dialogue between government and energy industry representatives.

Investments by the government will include £20 million from the Regional Growth Fund to improve the UK wind industry’s supply chain, and £46 million to join up innovation between industry, government and academia and help companies to bring new products to market.

The Green Investment Bank plans to invest a significant proportion of its £3.8 billion capital in offshore wind, co-investing in projects with commercial parties.

The Lincs wind farm, developed by Centrica and their project partners DONG Energy and Siemens, is expected able to produce enough electricity to meet the needs of 200,000 homes, equivalent to two-thirds of the homes in Lincolnshire.

Centrica’s wind assets have now climbed to 290GWh in the first six months of this year representing an 18% year-on-year boost. A final investment decision for Centrica’s next project, the roughly 530MW Race Bank offshore wind farm, is expected late this year or in 2014.

The UK currently has more offshore wind power than the rest of the world combined and has already crossed the 10GW installed capacity threshold generating enough energy to power more than 5.5 million homes.

According to industry group RenewableUK, the UK could have 8GW of capacity installed by 2016 and around 18GW installed by 2020, meaning offshore wind would supply around 18% of the UK’s electricity.

At the beginning of this month, Prime Minister David Cameron opened the world’s largest offshore wind farm off the Kent coast.

Several additional projects have come to fruition in the last fortnight – two onshore wind farms in Scotland (Calliachar and Kildrummy), and the 25 out of the 27 turbines at Teesside offshore wind farm are now fully operational.