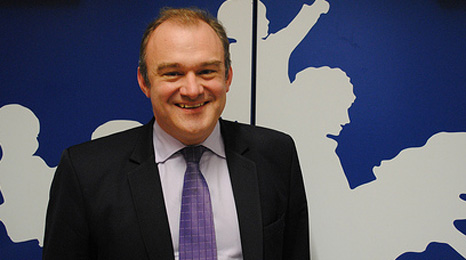 UK government plans to invest in renewable energy will not be pushed off course by supporters of shale gas exploration, also known as fracking, Ed Davey has told RTCC.

Britain’s energy and climate chief was talking after announcing a £66 million package to boost offshore wind in the UK, which the government says could “unlock £7 billion in the economy by 2020”.

In the past 10 days the Sun Newspaper, former BP chief Tony Hayward and influential conservative columnist Tim Montgomerie have all called for Davey to scrap support for renewables in favour of shale gas, but he told RTCC the opposite was likely to happen.

“We’re not changing our strategy except to even augment it so there’ll be more pro renewables. We have got the most ambitious renewable and low carbon energy strategy the country’s ever had,” he said.

“And coupled with the energy bill to create the world’s first ever low carbon electricity market we couldn’t be clearer about our determination to expand renewables and low carbon.”

The UK currently has an installed offshore wind capacity of over 3.3GW, with a further 1.3GW under construction.

Davey reiterated his ambition for the UK to be a “world leader” in the development of offshore wind, but acknowledges that the costs of offshore – currently higher than onshore or nuclear – have to be addressed.

“We’ve been working with the industry to map out the potential for cost reductions and when we published the stuff on the strike prices [subsidies] recently we showed that if we get the cost reductions that we believe we can we could see 16GW of offshore wind by the end of this decade,” said Davey.

“The potential for our industry is huge and actually being the leader gives a potential for exports and potential to learn how to innovate and how to get the cost benefits from large scale deployment.

“I think it’s right that we are leading – the problems we’ve seen in the past has been that Britain has been a follower and as a result we’ve had to actually end up paying more because we’re depending on other suppliers and we’ve not had the industrial base development with the jobs that come to that.”

“I think it’s great that under the coalition government we are making sure that we are not just a leader but remain a leader in the years ahead.”