China, the world’s largest methane emitter, is yet to sign a pledge to reduce emissions of the greenhouse gas 30% by 2030 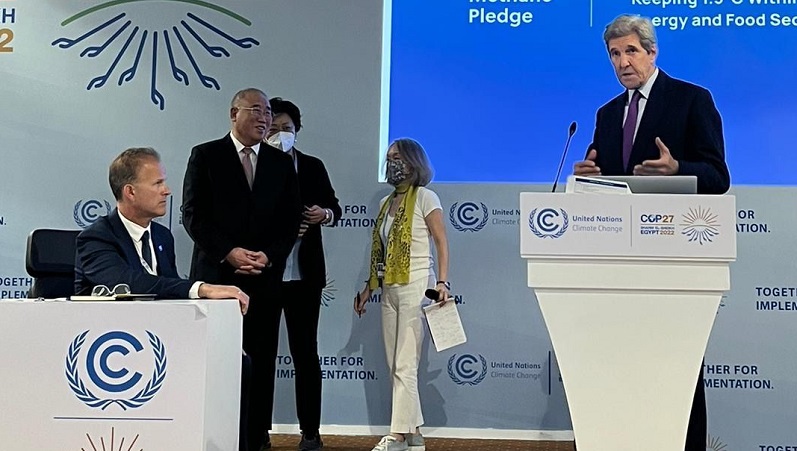 China’s climate envoy Xie Zhenhua unexpectedly dropped in on a Cop27 ministerial meeting led by the US and the EU, raising hopes that the world’s largest emitter will renew cooperation around methane emissions.

The meeting was a gathering of countries who signed the global methane pledge, a Cop26 initiative promising to collectively reduce methane emissions by 30% in 150 countries. China is one of less than 50 nations who have not signed.

Fifteen minutes into the meeting, in a Cop27 side-room in Sharm el-Sheikh, US climate envoy John Kerry tapped the speaker on the arm and pointed off stage, where Xie was entering the room.

As the more than 70 ministers in the room applauded, Kerry passed the microphone to Xie who took off his mask and approached the lectern. The organisers scrambled to find a translator and hurried her by Xie’s side.

“Colleagues you must find it a little bit strange why the Chinese envoy on climate would attend the global methane pledge,” he said, explaining his “good friend” Kerry invited him to attend earlier in the morning.

“Even though I currently have a meeting with German foreign minister, I told her to wait a little bit so I can come and talk to all of you,” he added.

As previously announced, he said China had a draft methane reduction strategy focussing on the three main sources —energy, farming and waste— and that it was passing through the legislative and administrative process.

He said China has “a little bit of a way to go so we can do surveillance and collect statistics as well as verification of our baseline”.

Climate talks between the US and China, including on methane emissions, were scheduled to begin in September. But China cancelled the meeting after Democrat congress leader Nancy Pelosi visited Taiwan.

After US president Joe Biden and China’s president Xi Jinping met at the G20 in Indonesia last week, they agreed to restart some of their formal discussions.

Methane is an invisible gas but can be spotted with special cameras, measuring equipment and satellite. Sources include leaks from oil and gas, landfills and cows and sheep digesting food.

China is the largest emitter of methane in the world, almost doubling runner-up India’s methane emissions, according to the International Energy Agency. Neither are in the Cop26 global methane pledge, which aims to reduce emissions by 30% in 2030.

Bernice Lee, a climate politics expert at Chatham House told Climate Home it was good that Xie dropped in and “had a publicly cooperative double act” with Kerry.

Lee added there is a draft methane plan which she “hoped” would be released soon. But, she said, it was “concerning that Xie did not mention coal specifically today”.

During the event, Kerry thanked Xie for showing up and reminded him of China’s commitment to work on a plan to address methane emissions. “Hopefully, hopefully in the days ahead, we are going to be able to do that,” he added.

Norway’s environment minister Espen Barth Eide said Xie’s surprise visit was a “joy” and added that “this is really promising for our overall work not only on methane – which is important enough – but on the global climate cooperation – so that was great news”.

He added that the pledge’s 150 signatories “may be 151 with a rather large one coming along relatively soon”.

Takeshi Akahori, the Japan foreign ministry’s director-general for global issues, said he was happy about Xie’s visit because the East is “very isolated” on tackling methane emissions. “[We] look forward to having China as [a pledge member] around us.”

At the meeting, ministers announced they were launching “pathways” on reducing methane emissions from farming and from waste. A pathway on energy has already been announced.