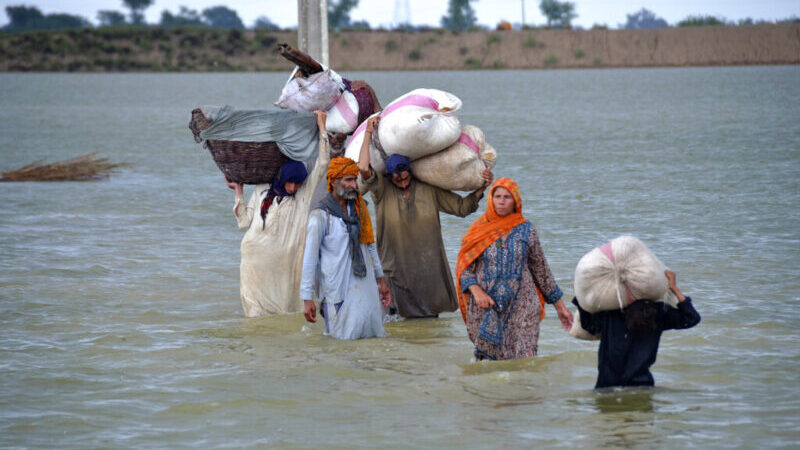 Nations vulnerable to climate change are increasingly calling for polluting companies like fossil fuel producers to pay for the loss and damage caused by climate change.

Developing countries have long called for the rich countries which disproportionately caused climate change to pay to repair the damage caused.

While keeping up these calls, groups like the Alliance of Small Island States (Aosis) and the influential prime minister of Barbados Mia Mottley are now switching their focus more to polluting companies rather than governments.

Developed governments have long resisted setting aside funds to address loss and damage, for fear of being held legally responsible for their pollution. But they have been more open-minded about calls for private sector funds.

Michai Robertson, Aosis lead finance negotiator told Climate Home that there should be a universal tax on the fossil fuel and other carbon intensive industries. “It’s time for the private sector to stand up and we need to hold them accountable”, he said.

Mottley made a similar call in her Cop27 opening speech. “It can not only be an issue of asking state parties to do the right thing,” she told leaders. “The oil and gas companies and those who facilitate them need to be brought into a special convocation between now and Cop28.”

She recently pitched the idea on the phone to US climate envoy John Kerry, according to her advisor Avinash Persaud.

Kerry later told reporters they “had a deep discussion” and “found a lot of agreement on where we’re heading and what we have to do here”. He did not go into details and the state department did not respond to a request for comment.

Asked about Mottley’s proposal, EU negotiator Jacob Werksman told Climate Home: “We’re all looking for innovative finance right…we’ve missed our $100bn goal, its proved to be much more of a stretch than we imagined.”

But, he said, “the idea of taxing oil companies is a very kind of headline notion. We’d have to know much more about the details of what that means in practice. The EU itself, in terms of the Commission, doesn’t have the authority to do that kind of taxation”.

Asked about a fossil fuel levy for loss and damage, the African Group’s lead loss and damage negotiator Alpha Kaloga told Climate Home: “This is something that we should explore”. He added: “We do support innovative sources of finance such as revenue from divestment from fossil fuel subsidies by developed countries, debt cancellation, Tobin taxes on [financial] transaction and air passenger levels, based on the historical responsibility of developed countries”.

A recent NGO report found that over the last decade, climate-induced economic losses suffered by a group of 58 vulnerable nations, known as the Vulnerable 20, amounted to just 1.7% of the fossil fuel industry’s profits.

Robertson said Aosis’ proposal was just at an “exploratory phase” and that there are “limitations” on the authority of the UN’s climate talks. If a Cop meeting reaches consensus, it can ask all governments to do things like set taxes but they cannot order them to.

Persaud said Mottley’s proposal is that, to avoid raising the cost of living, the levy would start at zero on today’s prices. But every time, the price of coal, oil and gas dropped by 10 percentage points, a 1% levy would go to a loss and damage financing facility.

As Glasgow forest pledge turns to action, most signatories drop out

When an independent agency declares a climate disaster or event in a country then money, perhaps based as a percentage of GDP, would be disbursed to the government to spend as needed, Persaud said.

He suggested the fund could be based on a similar model to the International Maritime Organisation’s oil pollution compensation funds. Those funds are financed by contributions paid by entities that receive certain types of oil by sea. The contributions are based on the amount of oil received and cover expected claims and the costs of administering the funds.

Details around the governance structure still need to be worked out but Persaud said the mechanism must be “dedicated and simple”.

“Every mechanism that requires a lot of institutional development, a lot of boards and flawed structures tend not to favour the powerless,” he said.

While he wanted more details on a fossil fuel levy, the EU’s Werksman said that there were “interesting examples” of innovative finance from specific sectors.

He mentioned the UN aviation body’s (Icao) rules which mean airlines have to buy offsets to cover emissions above a certain cap and the cap on shipping sector emissions which the UN’s shipping body is considering.

In September, United Nations secretary general António Guterres called for a windfall tax on oil and gas profits to fund loss and damage and to help people struggling with high food and energy prices. “Polluters must pay,” he said.

This article was updated on 9/11 to clarify Antonio Guterres proposal and on 11/11 to update Alpha Kaloga’s comments.