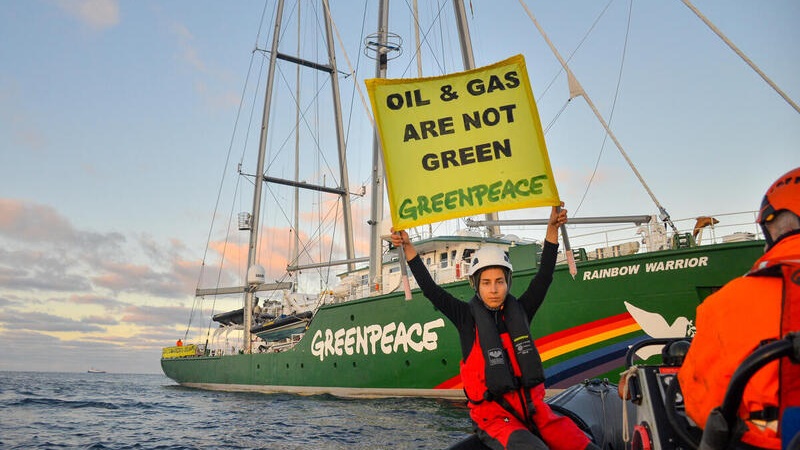 A protester against oil and gas exploration off the coast of Greece (Photo credit: Nicoletta Zarifi/Greenpeace)

Companies must stop funding coal, oil and gas if their claims to be “net zero aligned” are anything more than greenwash, a UN-appointed taskforce has said.

Thousands of big businesses and cities have declared commitments to reaching net zero emissions by 2050, in line with the Paris Agreement climate targets.

“Too many of these net zero pledges represent little more than empty slogans and hype,” said McKenna at a packed launch event at Cop27 in Sharm el-Sheikh, Egypt. “You cannot be a net zero leader while continuing to build or invest in fossil fuel supply.”

UN secretary general António Guterres said he had “a message to fossil fuel companies and their financial enablers”.

“So-called ‘net-zero pledges’ that exclude core products and activities are poisoning our planet. They must thoroughly review their pledges and align them with this new guidance,” said Guterres.

“Let’s tell it like it is. Using bogus ‘net-zero’ pledges to cover up massive fossil fuel expansion is reprehensible. It is rank deception. This toxic cover-up could push our world over the climate cliff. The sham must end.”

As Glasgow forest pledge turns to action, most signatories drop out

Oil majors like Saudi Aramco, ExxonMobil, BP, Shell and Eni claim to be aligned with net zero but continue to drill for more hydrocarbons.

A senior UN official said that “sometimes” fossil fuel firms’ net zero pledges were “part of marketing efforts or communication efforts”. They added: “If you’re going to say that, you better make sure it’s true.

As well as fossil fuel companies, the taskforce said that anyone who invests in new fossil fuel production is not net-zero aligned. That includes cities, regions and finance firms.

This is a stronger line than the UN’s Race to Zero, which only says “corporations and investors must restrict the development, financing, and facilitation of new fossil fuel assets”.

In June 2022, the Race to Zero said that this “includes no new coal projects” without mentioning oil and gas. Under legal advice this could expose members to competition lawsuits, it removed even this stipulation from the website.

Krista Halttunen researches oil company strategies at Imperial College London. She said that no fossil fuel company has agreed to stop investing in new fossil fuels, so none met the net zero criteria.

She told Climate Home that these guidelines “will be a good test. Which are the companies that are ready to transition?”

In May 2021, the International Energy Agency found that no new fossil fuel projects were compatible with limiting global warming to 1.5C. An update to its net zero by 2050 scenario last month noted that reduced Russian oil and gas output might make space for some limited investment in infrastructure with a quick payback, but did not radically change the picture.

In March 2022, the Science-Based Targets Initiative stopped accepting climate commitments of fossil fuel companies for validation. A spokesperson said this was a temporary move, while it works on criteria that the industry and scientists can accept.

The McKenna taskforce’s recommendations covered all businesses, cities and regions. It said that net zero plans should include interim targets every five years starting in 2025 and count emissions from the end use of products (scope 3). Firms should align their lobbying with climate commitments.

Halttunen said that lobbying was particularly important. For example, Shell and BP are members of the American Petroleum Institute (API), which lobbies against climate policies in the USA.

InfluenceMap’s Will Aitchison said this was a “watershed moment when it comes to corporate lobbying on climate policy, which has long stymied action from governments”.

“These recommendations break new ground in setting expectations not just for companies, but also for powerful third parties like industry associations,” he said.

The taskforce said that carbon offsets should be of a high quality and should only be used as a last resort, after a firm’s own emissions have been reduced.