The US special envoy wants to use carbon credits to speed up the clean energy transition – but experts are sceptical the scheme can meet best practice. 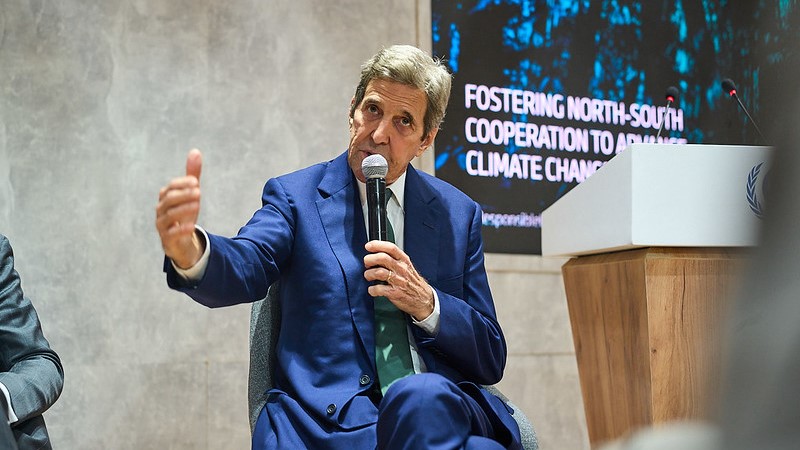 A day after UN head António Guterres warned there should be “zero tolerance for net-zero greenwashing”, the standards for credible pledges proposed by his group of experts are already coming to the test.

At the Cop27 climate summit, US special envoy John Kerry launched a proposal to use carbon credits to speed up the retirement of coal power and the roll out of renewables in developing countries.

The idea, first reported by Climate Home News earlier this month, is still in its infancy and most of the details remain to be worked out.

On Wednesday, Kerry announced a partnership between the US State Department, philanthropic groups Rockefeller Foundation and Bezos Earth Fund to deliver the initiative, called the Energy Transition Accelerator.

Kerry insisted that the initiative would align with Guterres’ expert group’s recommendations that offsets should be high quality and used as a last resort, after a company has reduced its emission reductions.

But analysts are sceptic the barely fleshed out concept will meet the high bar of standards set out by Guterres’ expert group.

The UN chief warned that all new voluntary carbon market initiatives must abide by the group’s recommendations. One of the key principles is that companies setting net zero goals must stop funding fossil fuels.

Kerry said that only companies with set science-based targets and commitments to achieve net zero emissions by 2050 would be able to take part. Fossil fuel companies would be excluded.

However, oil and gas companies are among the largest buyer group on the $2 billion voluntary carbon market.

“We have seen a consolidation over the last 24 hours of what net zero really means,” said Rachel Kyte, co-chair of the Voluntary Carbon Markets Integrity Initiative, which is also working on offsetting standards. “We can innovate… but we have got to meet the standards.”

What’s the noun for those who call for and support the establishment of a standard and then undermine it when it’s inconvenient? #COP27 #climate

Kerry promised that “strong safeguards” will ensure the credits are aligned with best practice. The partnership will ensure “that we are not repeating the mistakes of the past: no double counting, no greenwash,” he said.

Broad principles agreed by the partnership include limiting the lifespan of the scheme to 2030 or 2035. Kerry suggested the number of credits for sale could also be limited.

Credits will be issued at the jurisdiction level, either by countries or at the sub-national level. Buyers “must use these credits to supplement and not substitute emission reductions,” Kerry said. “This is not in lieu of any other finance commitment.”

The US State Department’s press release states that companies could use credits to support emission cuts “above and beyond their interim targets”. But Kerry also suggested they could be used towards companies’ near-term targets or to address a limited share of the emissions from a company’s product use.

In addition, 5% of the value of the credits would go towards supporting climate adaptation in developing countries. It is unclear whether the money would go to the Adaptation Fund or another institution.

The focus on accelerating the shift away from coal as the key purpose of the scheme is also unclear.

The partnership hailed interest from Chile and Nigeria in taking part in the initiative. But Nigeria isn’t reliant on coal for economic revenues or energy use.

“There are next to no details on how this would even work in practice. This is not so much half-baked as it is raw cookie dough,” said Leo Roberts, of E3G’s coal transition team.

Roberts told Climate Home the US had in its hands “much more impactful and much less reputationally damaging levers” for scaling up private finance for the transition.

Recommendations made to the G20 to reform the World Bank, in which the US is the largest shareholder, and multilateral development banks “could leverage a trillion in concessional finance,” he added.

The details will have to be worked out in broad consultations with stakeholders, with a plan more a more concrete proposal to be presented at Cop28 in Dubai next year, Kerry said.

According to the State Department, Bank of America, Microsoft, PepsiCo, and Standard Chartered Bank have said they are interesting in taking part and would like to be involved in the initiative’s development.

Angela Churie Kallhauge, executive vice president at the Environmental Defense Fund, told Climate Home: “This is about the importance of opening up for an inclusive process. It is now an opportunity where we can jointly be shaping this initiative rather than us come with a fully ready proposal that has not had a chance to be tested, discussed and debated.”