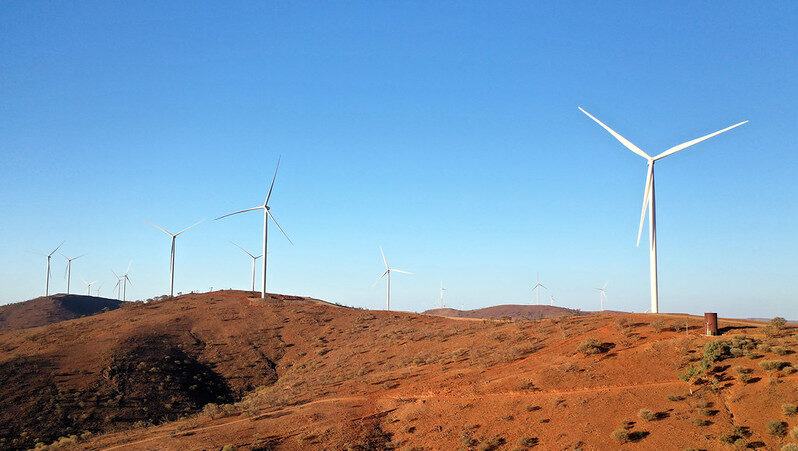 South Australia – already leading the world with its share of wind and solar – is poised to become the first grid of its size to operate without synchronous generation within the next few years, according to a new planning document from the market operator.

South Australia leads the world with the penetration of wind and solar in its grid, and has averaged more than 64% over the last 12 months.

It regularly reaches levels where wind and solar produce more than 100% of state demand – in fact it set a new record of 146% of state demand from wind only on Wednesday morning – but this excess is exported to Victoria through its transmission links.

Even when wind and solar have produced much more electricity than is needed in the state at any one time, it has always had to have some synchronous generators, and always gas fired generators in South Australia, running to ensure some of the principal grid services can still be delivered.

This requirement was last year reduced from four generators to two generators after the installation of four synchronous condensers that are spinning machines, but do not burn fuel, and can deliver many of those same services as synchronous generators.

Now the Australian Energy Market Operator (AEMO) is looking to reduce that number from two to one.

Most of the time the second one is only running as a backup incase the other gas generators suddenly fails, but a growing confidence in the ability of battery inverter technology to provide those services, and the presence of more “fast start” generators that could quickly switch on in case of an incident, means that AEMO is now thinking about reducing its minimum requirement to one synchronous generator.

The immediate impact of that is that fossil fuel’s share of overall generation in the state (including that for export) could fall from its current minimum of around 5% to just 2%, because only one synchronous generator will be required.

And that in turn will further reduce curtailment of wind and solar, and on the number of “directions” from AEMO for gas generators to run. That has already fallen dramatically in the last year.

It also means, that with the completion of the new link to New South Wales due in 2025/26, the state will likely be able to remove the need for even a single synchronous generator when that is connected.

Christian Zuur, the head of energy transition at the Clean Energy Council, described it as a “remarkable” document in a LinkedIn post.

“South Australia (is) again at the forefront of the clean energy transition,” Zuur wrote.

“AEMO advised that subject to some technical studies being completed, they are looking to reduce the minimum requirement to just one gas generator … and are undertaking further studies to understand whether that last unit can be taken offline.

“This would be a world first, as far as I am aware, and is something to watch very closely in coming months.”

South Australia is a living laboratory of how to manage the transition to wind and solar, and an inverter-based grid, and – as Zuur says – it is remarkable to see how the engineering assessment of system needs has rapidly evolved in recent years.

The new document says that for some of the critical grid services, the synchronous generators are already redundant. This includes grid forming and grid reference, two qualities that can now be provided by so-called “grid forming inverters” that are deployed at two South Australian batteries – Dalrymple North and Hornsdale.

“Results of power system analysis suggest a synchronous generator may not be required for grid reference. This means grid-following inverter based resources can ‘latch-on’ to the voltage waveform supplied by the synchronous condensers.”

It says more system tests will be required to demonstrate grid formation and grid reference in a power system the size and scale of South Australia with no synchronous generating units online, and it will continue to look at the capabilities of battery inverters through its program that it is running with ARENA.

There are challenges in some parts of the grid with voltage control, which AEMO and the local network operator ElectraNet are looking in to, and in large “ramping” events, when the amount of wind and solar produced suddenly changes, such as in the evening.

It is satisfied that now only one, rather than two units, are required to handle these events, but wants more work before reducing that to zero, and is considering measures such as ensuring enough battery inverters are in reserve, or fast start generators ready to go if needed.

Similar work is looking at the issues of frequency control and network protection, but it says that it is now clear that even one synchronous generator will not be required to be on line at all times – in system normal conditionas- once the new NSW link is completed and a scheme put in place to manage a sudden loss of those links.

This, of course, doesn’t mean that fossil fuels are not needed and that the remaining unit will be closed. South Australia still has a way to go to build enough wind and solar – and storage – to cover the gaps to provide close to an average of 100% renewables all year around.

Small grids can to it, but the fact that a gigawatt scale grid is now within touching distance of running at times with no fossil fuels, and no synchronous generation is – as Zuur notes – quite remarkable.

It would have been unthinkable a decade or so ago, and it should be noted that some doubters in the industry still question if it is indeed possible. And when it does happen, it will remove the last quibbles about whether a state grid is truly 100% renewables or not.