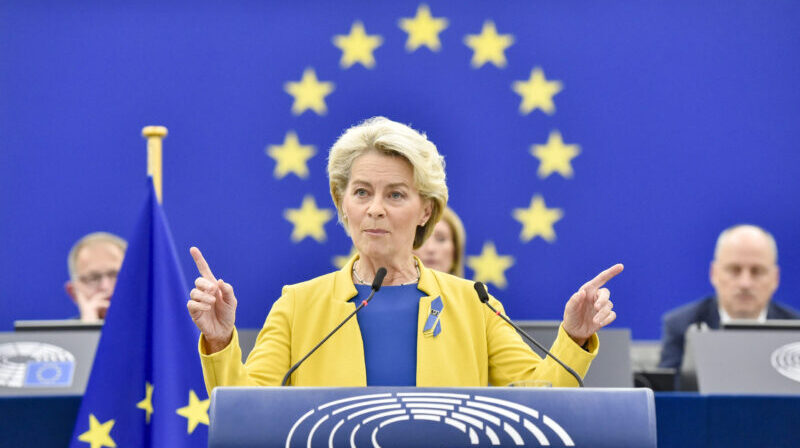 The European Commission has stepped back from earlier plans to cap the price of Russian gas, proposing instead to set up a new task force with EU member state representatives that will attempt to negotiate deals with key suppliers such as Norway.

In her annual state of the union speech before the European Parliament in Strasbourg on Wednesday (14 September), Commission president Ursula von der Leyen said negotiation would be a more efficient way to lower gas prices, which are set on the global market.

A new task force will be set up to negotiate deals with Norway and other gas suppliers so that “we lower in a reasonable manner the price for gas,” said von der Leyen, the former German defence minister who took the helm of the EU executive in December 2019.

The move was welcomed by Simone Tagliapietra, a senior fellow at the Bruegel economic think tank in Brussels.

“She is right: this is the way to go – possibly with via EU joint action to leverage the size of the European gas market,” he told Euractiv.

In parallel, von der Leyen announced the creation of a new gas market benchmark to reflect the EU’s rapid shift from imported pipeline gas to liquified natural gas (LNG), which is traded on the global market and shipped from faraway places such as Qatar and the United States.

“We have to diversify away from Russia,” she insisted, noting that pipeline gas supplies from Moscow have now fallen to 9% of EU gas consumption from around 40% last year.

In the face of soaring gas prices, EU countries have poured billions into social protection measures in order to shield the most vulnerable households.

To help finance this, von der Leyen announced the creation of a windfall tax on the “revenues of companies that produce electricity at a low cost” – typically renewables and nuclear. A draft proposal, seen by Euractiv, puts the limit at €180/MWh, the same level that has been introduced in Spain.

A separate “solidarity contribution” will be demanded of oil and gas companies, which have reaped extraordinary profits from soaring prices on global energy markets.

“Our proposal will raise more than €140 billion” for EU member states to cushion the blow of the energy crisis on European consumers, von der Leyen announced.

At the same time, the Commission president warned against repeating the mistakes of the 1970s oil crisis by investing too much in new fossil fuel infrastructure.

“Only a few visionaries realised the problem was the fossil fuels themselves – not their price”, she said. “We kept driving on the same road” and “fossil fuels were massively subsidised,” she warned. “That was wrong and we are still paying the price for that.”

To ensure investments in future clean energy infrastructure, von der Leyen announced the creation of a “European hydrogen bank” that will “guarantee” the purchase of hydrogen thanks to funds drawn from the EU carbon market, the Emissions Trading Scheme (ETS).

The new bank “will be able to invest €3 billion to help build the future market for hydrogen,” von der Leyen said.

It is expected to be modelled on the German H2-Global foundation, financed with €900 million, which is expected to enter operation soon. The bank offers a guaranteed price for hydrogen for up to ten years by covering the difference between production costs and the sales price.

Turning to the power market, von der Leyen emphasised the need to “decouple the dominant influence of gas on the price of electricity ” in order to ensure consumers “reap the benefits of low-cost renewables”.

“My diagnosis is that the current electricity market design based on the principle of merit order, is not fit anymore, it’s not fit for consumers anymore,” von der Leyen said, confirming plans announced earlier this year to fundamentally redesign the EU’s electricity market.